Destination Races Ideal for Turning Into a Vacation 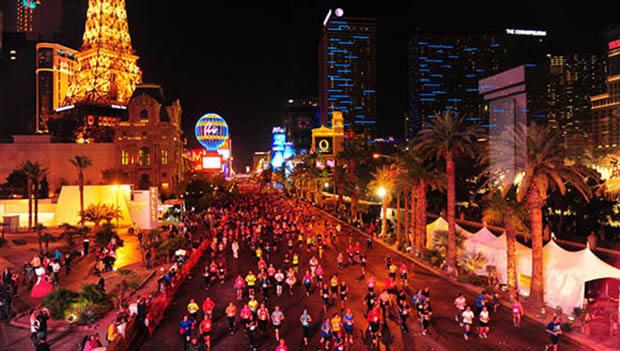 Races are often chosen based on location, with a large percentage of these being close in proximity to a runner's home. But occasionally, runners aim for a more exciting and memorable adventure, turning a race into an excuse for a full-blown destination vacation. And if you're looking to get out of town and run in a place you never have before, check out these races in some of the world's most popular locations.

Lace up your shoes or wax up your stand up paddleboards for the longest-running race in Key West. The three-mile paddleboard race will begin at 6 p.m., followed by the 5K at 7:30 p.m.

The road race will take runners through Old Town Key West, passing notable landmarks like the Ernest Hemingway Home &amp; Museum. This event commemorates the life and work of the author, who lived in Key West during the 1930s, and the races are a nod to his adventurous sporting lifestyle.

The Kaua'i Marathon and Half Marathon
Sunday, September 1, 2019 in Poipu Beach Kauai, Hawaii

Sparkling blue water, pristine white sand beaches and lush rainforests: These are just a few of the unforgettable sights awaiting both marathon and half marathon participants at this Hawaiian race. The eighth annual race begins at 6 a.m. to beat the heat, but this just means you have the rest of the day to enjoy the island.

Bring the whole family and have the kids sign up for the Keiki Run, which offers a Toddler Trot, quarter-mile and half-mile fun run on the Saturday before the full and half marathon.

Another perk? Not only are you running in a tropical paradise, your entry fee is helping a number of local charities and non-profit groups thrive, including donations to help fight cancer and children's diseases.

Head Down Under for an Australian vacation and the Sydney Running Festival. This event offers a marathon, half marathon and 9-kilometer Bridge Run, which all unfold across the main deck of the iconic Sydney Harbour Bridge. The full and half marathon courses finish at the world-famous Sydney Opera House, making for spectacular finisher's photos worth framing.

This year's edition features courses that are flatter, faster and more beautiful than ever, giving both locals and visiting runners an unforgettable experience.

Get ready to run and rock in Montreal with five different distances to choose from in this destination race. From 1K to full marathon, there's a race for everyone in the family. Then, after you get your medal, stick around for Rock 'n' Roll's infamous post-race concert featuring the Canadian band Moist.

Runners don't just come to Montreal for the running or the scenery. Explore all the things Canada's second-largest city has to offer-—from the stunning architecture to its surrounding rivers.

The Adirondack Marathon Distance Festival winds through the Adirondack Forest Preserve—which, in and of itself, should be more than enough reason to add this event to your bucket list. Hosted in Schroon Lake, N.Y., the race follows the shores of this crystal clear lake, along two-lane country roads and into the forest, where gorgeous foliage awaits.

Competitors can choose from the full marathon, half marathon, as well as two- and four-person relays.

This Boston-qualifier takes place in the Big Apple's famous Prospect Park, encompassing six full park loops and three lower loops—making it perfect for spectators to get multiple views of their favorite runners. The race was named Marathon of the Year in 2012 by Travelete.com, and will offer hot chocolate, bagels, spreads and fresh fruit at the finish line.

Registration will be capped at 500 people and the race has sold out every year since it began in 2011, so be sure to register early.

The reasons to run in this event could be summed up in two words: Apalachicola Bay. This spectacularly beautiful American estuary is worth the trip to Apalachicola on its own. Combine that with five race distances (marathon, half marathon, 10K, 5K and ultra marathon 50K) and this becomes one of the premier destination races of the year.

All courses are USTAF-certified and the marathon will get you to Boston, so what are you waiting for?

In its seventh year, Rock 'n' Roll Savannah is still as full of charm and southern hospitality as it was in year one. Run under the picturesque live oak trees dripping in Spanish moss, through the city's historic downtown and along the flowing Savannah River.

But the fun doesn't stop once you cross the finish line. Explore all Savannah has to offer while you're there: pick up some saltwater taffy on River Street, take a historic ghost tour or even make a visit to Paula Deen's Lady and Sons restaurant for some traditional Southern cooking.

This gorgeous out-and-back half marathon route begins and ends on the Pacific Coast Highway just north of Point Mugu Beach, with a turnaround near the iconic Neptune's Net restaurant. The entire course for both distances is run on the PCH, offering sights of crashing waves, rocky bluffs and miles of sandy beaches.

The race is mainly flat with only a few rolling hills and no turns (other than the halfway turnaround point), so it's a great opportunity to attempt your next 13.1 or 5K PR.

Visiting Las Vegas during the day is great, but we all know the real party doesn't start until the sun goes down. That's why this race is held when the skies are a deep, midnight blue. From 5K to a full 26.2, run along the famous Las Vegas strip—it's an experience you don't want to miss.

But that's not all. Looking to marry your sweetie or just renew your vows? You can do it right on the marathon or half marathon race course at the Run Through Wedding. Be joined in holy matrimony before finishing your race and kickoff your rockin' honeymoon all in one trip!

The Florida Keys are a favorite vacation spot because of their easy access, incredible tropical setting and because you don't need a passport. This second annual event offers a half marathon and 10K, providing participants an unforgettable running tour of the island. Organizers have also added a Beach N' Beer Mile this year for those who want a less serious race, challenging runners to consume four beers over the span of a one-mile beach course (that still sounds pretty serious to us).

Are you a runner who also enjoys fishing? This event is held in the Sport Fishing Capital of the World, so be sure to leave yourself plenty of time to hit the water with a rod and reel.

Ready to run for something more than a medal? The DONNA Marathon Weekend—which includes a 5K, 10K, relay, half marathon, marathon, ultramarathon and event challenges—is filled with over 10,000 runners from across the globe and, as the National Marathon to Finish Breast Cancer, the event is very, very pink.

The course if fast and flat and the beautiful beach communities that line the course have become very adept at throwing a 26-mile long party on the sand.

READ THIS NEXT: How to Plan (and Enjoy) a Destination Run-cation