What is Matcha Tea? 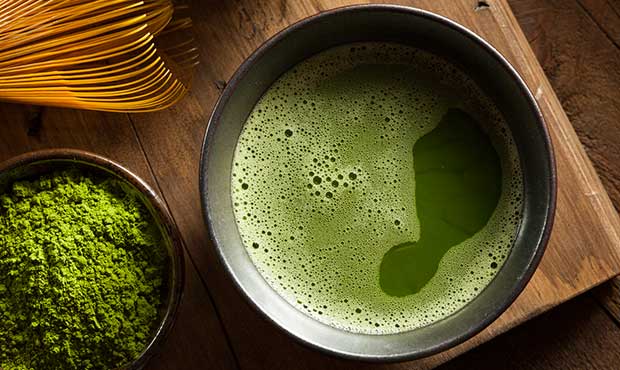 It seems like matcha tea is all you hear about in health-conscious circles—and for good reason.

Deemed an antioxidant powerhouse, matcha not only has many health benefits, such as boosting heart health, but meditative properties, as well. And because of its powdery consistency, you can also find it in other forms of cooking outside of traditional tea.

Don't let the green hue deter you—learn all about the benefits of this trendy wonder drink and what it can do for you.

Matcha literally means "powdered tea." Unlike traditional tea in which the leaves are steeped and then discarded, matcha tea contains green tea leaves crushed down into a fine powder that are then mixed with hot water until frothy.

Because you're consuming the actual leaves, you get triple the caffeine and triple the benefits of the already good-for-you green tea. Be prepared for a strong taste though; matcha is usually described as having a spinach-like flavor, but it can easily be sweetened to suit your taste buds.

Aside from its physical properties, matcha also has strong roots in Zen teachings. A center of Japanese tea ceremonies, the preparation of matcha tea can become a meditation practice for those interested in its mindful benefits.

Just like a regular green tea, matcha tea can boost your overall health. Not only does it have a high concentration of antioxidants, which helps regulate blood sugars, protects against multiple diseases and slows aging, but it also delivers essential vitamins to the body.

The tea has also been known to have mood-improving benefits, relaxing the mind and body without inducing sleepiness. And, like most green teas, matcha can boost your metabolism for better fat- and calorie-burn.

One thing to be aware of before consuming matcha tea is its lead content. Trace amounts of lead are typically found in tealeaves, but because most of the leaf is discarded during traditional tea brewing, it isn't a concern. Because you're consuming the entire tealeaf when you drink matcha, it is estimated that your potential metal consumption is three times the normal amount.

However, matcha is still healthy to consume if you:
1. Stick to Japanese-grown matcha teas, as they have the most testing standards for presence of metals.
2. Keep your consumption to one cup per day or less.

Where to Find Matcha Tea

Because matcha is grown in the shade, hand-picked and then steamed, its production process requires a little more than your average tea packaging. This accounts for the higher cost, but you do get what you pay for in terms of benefits.

Matcha powder can be found in most retail stores, including Whole Foods Market and Walmart. Want it delivered straight to your door? Amazon also carries matcha tea.

Due to its rise in popularity, matcha tea can also be found in a variety of foods, including baked goods, soups and dips.