A Commuter Rides a Century: 4 Quick Tips for Shifting Gears 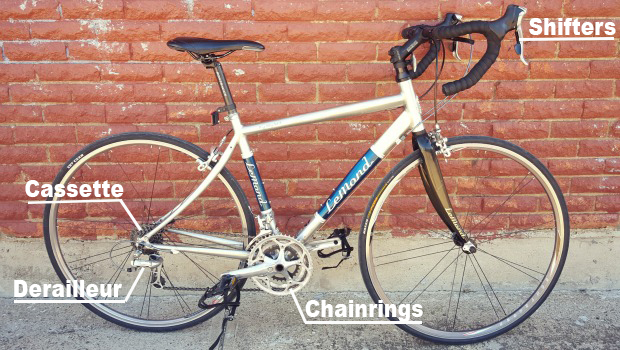 Unlike a Cadillac, which has four or five gears, most road bikes come equipped with well over 20 different gearing combinations. This is because of the front chainrings, which include two or three gears that make for more extreme shifts; your gears are essentially multiplied by however many chainrings your bike has.

Like many chamois-less cyclists with cage pedals, I always avoided shifting the front chainring. However, these drastic shifts come in handy.

The point of the front two or three chainrings are not to advertise how badass a cyclist is if he or she happens to have their chain in the big ring (which means a higher gear), but to make shifting easier on extreme changes in terrain.

I learned this the hard way.

When I was getting used to using my full rear cassette (but wouldn’t dare venture into chainring territory), I would shift four, five, even six times to reach a gear that satisfied my cadence. All the while staying in the middle chainring up front.

I could have saved myself the trouble of all this shifting—not to mention the wear it puts on the derailleur—if I had just shifted into the smaller chainring.

Likewise, if you reach the summit and begin a massive descent, you can shift to the big chainring to continue your pedaling down the hill (Peter Sagan style!).

3. Shift Early on Hills (Plan Ahead and Shift up Before You Shift Down)

When it comes to shifting gears, timing is everything.

Though you shouldn’t fear the big chainring, a significant drop in gear can cause you to lose momentum on a climb (getting nowhere fast). The key is, before the climb, to shift your cassette up a couple of gears before you shift the front derailleur down.

When you see a hill in the not-too-distant future, it’s important to get your chain in just the right place on the rear cassette in anticipation of the larger jump that comes when you shift your front derailleur.

While it might make pedaling a little harder when you go into a higher gear on the cassette, this brief moment of hardship won’t cause you to lose momentum, which would create an even bigger burden.

4. Take It Easy When Shifting (But Not Too Easy)

Shifting smoothly is another skill that comes with practice.

My bike used to jerk and make a not-so-appealing, metal-on-metal sound anytime I moved between my preferred couple of gears. I’m happy to say that, while still imperfect, this has improved.

To change gears, you must pedal. However, you don’t want to pedal too hard.

Think of it as a clutch (yes, back to the car analogy). When you’re driving a stick shift, you want to relieve a little bit of pressure off the accelerator before pressing the clutch and shifting gears, but you still want to rev the engine a little bit.

Without the engine (in this case, your legs) working, there’s no tension for the gears to shift. So, you need tension, but not too much. You want to turn the pedals without necessarily stressing them.

If you’re pedaling too hard, or give a big push into a gear, the chain could skip or fall off.

Learning how to shift will come instinctually as you accumulate more miles in the saddle. Just keep your bike and your enthusiasm in one piece.