Why Your Next Triathlon Racecation Should Be to Bermuda 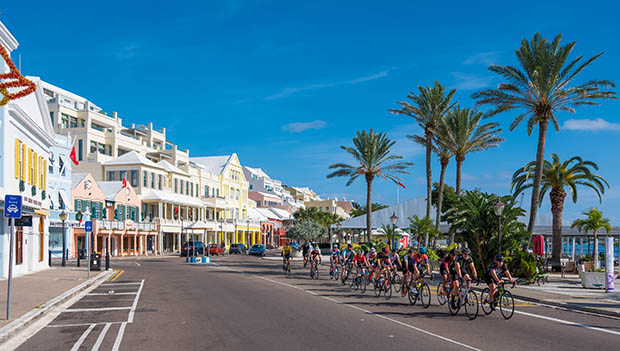 Modern triathlon has exploded into a worldwide phenomenon in the matter of a few short decades. What started as a grassroots event on the iconic shores of San Diego can now be found in some of the most unique and beautiful countries across the globe. The courses themselves are always something to experience, but when paired with the local cuisine and surrounding sights, a triathlon becomes much more than just a swim-bike-run race.

One such race destination is Bermuda–a 21-square mile island off the coast of North Carolina that has become an endurance-sports hotspot. The ITU World Triathlon Series makes a stop in Bermuda at the end of April, and the race weekend includes both elite and age-group races.

“I attended the Inaugural 2018 Bermuda WTS and Age-Group event and loved it!” Barry Siff, International Triathlon Union (ITU) Executive Board Member and USA Triathlon Board of Directors President, says. “Everything about the races, the Island and the people was absolutely first-class and wonderful. This would be a terrific triathlon experience for anyone. Enjoy!”

As if a world-class triathlon on an island wasn’t convincing enough, we’ve outlined our top reasons why your next racecation should be to Bermuda.

To learn more about and register for ITU WTS Bermuda, click here.

Don’t let its relatively small size fool you, Bermuda has all the amenities and accommodations a triathlete could ask for. No matter if you like to stay in the city or in a hotel on a private beach, there are several options for athletes and their families. The Hamilton Princess and Beach Club is the official event hotel for WTS Bermuda and features a luxury waterfront view and is walking distance to the race course.

Located in the Atlantic Ocean, just 650 miles off the coast of North Carolina, Bermuda doesn’t have the high temperatures and humidity as other more southernly islands. Even during the peak of summer, Bermuda generally tops out around the mid-80s. The late-April race date will see temperatures between 65 and 75 degrees—optimal for peak performance (and more enjoyable for spectators) out on the course.

We know air travel can be stressful; there’s nothing worse than sharing potentially race-ending germs with your neighbor for hours on end. But especially for U.S. triathletes, getting to Bermuda doesn’t require a 12-hour flight halfway across the globe to experience a stunning race course. Many major U.S. airlines operate daily flights to the island, and it’s less than two hours from most east coast cities. For more information for travel tips on how to get to Bermuda, click here.

You guessed it–Bermuda is known for its world-class seafood dishes, and a couple of the local favorites include options like fish chowder and wahoo crudo. Not surprisingly, the fish are caught daily off the Bermudian shores, so you know the spread is about as fresh as it gets. But if seafood isn’t your thing (or isn’t on the pre-race menu), worry not–its take on curry, pasta and steak are a few other must-try mentions.

If you’re planning to make your Bermudian escape a racecation, you might as well arrive early and familiarize yourself with the climate and terrain before the big day. There are plenty of cycling and running routes around the island to enjoy. Olympian Flora Duffy suggests a ride past Tobacco Bay and Fort St. Catherine, and proposes running on the 18-mile Railway Trail or through the Bermuda Botanical Gardens. If you’re not sure where to go, there are a few local cycling and running groups that host occasional group rides and runs.

Bermuda boasts 75 miles of coastline, so there’s tons of beach access and space for open water swimming. Known for their calm, clear waters and abundant sea life, Clarence Cove or Clearwater Beach are some easily accessible, go-to options. Be sure to keep the wind direction in mind, and as always, remember that it’s safer to swim with other athletes when possible. If you prefer to train in a pool, check out the swimming pool at the National Sports Centre.

Be a Part of History

The Bermuda Triathlon Association has done a great job fostering a strong triathlon community in the country through organizing and hosting around five formal events each year. Most impressively though, Bermuda will host the ITU World Triathlon Grand Finals in 2021. By participating in WTS Bermuda in 2019, athletes will have a chance to experience the future world championship course.

While swimming, cycling and running are the foundation of a racecation, it’s important to keep your family and friends entertained and happy throughout the duration of the trip. Besides featuring a spectator-friendly race course for easy cheering, the island offers tons of experiences to take advantage of. From learning more about the natural history of the island at the Bermuda Aquarium, Museum and Zoo to snorkeling through protected beaches and coves, there’s plenty to do before and after race day for even the pickiest of vacationers.

For more information and to register for the race, visit Bermuda.Triathlon.org.

READ THIS NEXT: Destination Racing Tips for Triathletes