Managing "Self" in the Run-Up to an "A" Race

So, what do we need to do to go beyond the numbers and achieve our peak performance? We can certainly learn from digging deeper into some basic sport psychology tools.

One thing I like to do with athletes is to explore their beliefs and perceptions relating to their "A" race. By listing fears into controllable and uncontrollable factors and then put strategies in place to deal with them is a great way to do it. 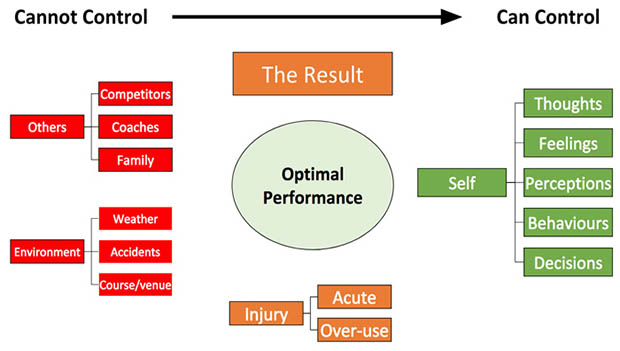 Pre-race anxiety is heightened by the "fight or flight" response, resulting in many athletes coming up with multiple excuses as to why they may not perform. It also makes some of us very difficult to live with in the run up to a race.

We often experience a heightened sense of threat within our environment and greater body awareness in which minor twinges seem like career-threatening injuries. By recognizing and accepting such feelings for what they are, it becomes easier to cope with these pre-race anxieties.

Because of the significant time-commitment we put into our sport, many of us worry about letting significant others down if we perform below par. Simply by accepting that the feelings of those who love or care about us are not dependent on your performance can help alleviate fear of failure.

Another fear with many athletes is that we lack confidence in our race preparation such as not training hard or long enough. The fact is that even if there is some basis of truth in your beliefs, holding on to these negative feelings won't be helpful on race day.

Rather, if you've reached the final two-weeks underprepared, then it's impossible to make up for lost time.  A good strategy to overcome this lack of confidence is to think about a race or session that you have felt below-par and have still performed relatively well. By doing so and then focusing on the processes we can control, it is easier to develop the belief that a good-- if not great--performance is still attainable.

The taper period can be a particularly challenging time mentally for athletes. This is not only due to pre-race anxieties but also because some physiological changes that occur during the taper may influence how we feel and behave.

Training rewards us by releasing feel-good hormones such as opioids, catecholamines and dopamine. With reduced training load, we may not get our regular "hit," and such deprivation can lead to feelings of low mood, increased tension and fatigue.

Such feelings are normal, and they are rarely markers of a loss in fitness or impending doom. Most importantly, they are certainly not an excuse to do an extra few sessions. To alleviate negative feelings, most top athletes have "go-to" sessions which can help overcome negative feelings, grow confidence and fine-tune their engine.

I am not overly concerned about the session content or achieving a specific TSB, as long as training does not result in excess fatigue and the athlete enjoys doing it. This is because the hard work should already have been done in the preceding months.

The bike session below has been designed to help an athlete prepare for an IRONMAN 70.3 race. It is a hard one that includes race-specific as well as maximal (aerobic) efforts. Pushing to the max releases these feel-good hormones and may also result in up-regulation of aerobic enzymes, which help further fine-tune the aerobic engine.