The Only Three Running Workouts Triathletes Need To Do

When triathletes start reading up on run training techniques used by the best runners in the world, they often hear about how running 100 miles a week is the minimum cost of being a good runner. This gives triathletes the false impression that they need to run huge volumes to have a good run during their race. Fortunately, this is not the case.

Pure runners log huge miles because they only have one sport to focus on. Elite runners also only perform just a few hard workouts each week while the rest of their time is spent on easy sessions, done just to maintain a high level of fitness. Triathletes don't have time to run huge mileage each week, but fortunately the combination of swim, bike and run training builds a generally high level of fitness that allows triathletes to run less.

Triathletes only really need to focus on three key run workouts each week.

Workout No. 1: The Long Run

No matter what length of race you're training for, you'll need to build up an adequate amount of endurance to be able to cover the distance of the race. We do this with the long run.

Workout No. 2: The Speed Run

One of the biggest things likely holding you back from running well in your races is the fact that you aren't running fast enough on your fast days. Once per week, you should run hard (really hard!) at a track, on a treadmill or on a running route that doesn't feature a lot of stops and starts.

At the beginning of the season, these fast runs could be a series of 100-meter sprints or even 8-second max effort hill runs with several minutes between sets. As the season progresses, intervals should extend to 200-meter, 400-meter, 800-meter, 1-km or even 1-mile hard efforts with only a minute rest between. The pace on these fast runs should be as hard as you can run during each interval while not dropping the pace from one interval to the next and only completing enough intervals so you feel like you could have done one more.

Within the final month or two months before a race, these fast runs can evolve into a continuous tempo run done at 10 to 30 seconds per kilometer (16 to 48 seconds per mile) above race pace. Sprint athletes should try to hold this pace for 15 continuous minutes, Olympic athletes for 30 minutes, 70.3 triathletes for 45 minutes and IRONMAN athletes for 60 minutes.

Workout No. 3: The Brick Run

Finally, triathletes have to be able to run after biking, which cannot be done comfortably unless you train for it. Total beginner triathletes should aim to have six to 10 brick workouts before your first race; a brick workout sees an athlete going immediately from the bike into a run. Even just running for 10 minutes after a bike workout will be enough to teach your body how to run immediately after cycling.

Some coaches disagree with having to do large numbers of brick workouts, but it's an efficient way to get in an extra run when you're already training. it's recommended to do one brick workout per week, or even two brick workouts per week if you find it's logistically easier than trying to fit in a completely separate run.

With just these three running workouts done each week, you should be able to make huge improvements to your triathlon run during your next race.

READ THIS NEXT: 3 Brick Workouts to Help You Run Faster, Longer 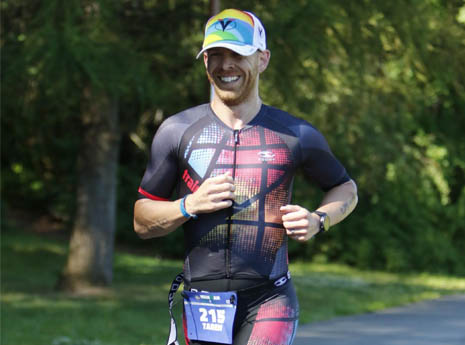