Is Compression More Effective Than an Ice Bath? 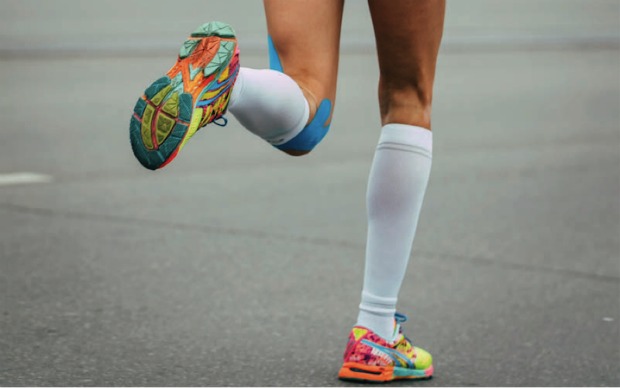 So you just pulverized yourself with a hard effort in an IRONMAN, and you don't need to look up the original research performed by Ball State University's David Costill to know that the muscle cells in your calves, quads, hamstrings and glutes have exploded. It was in Costill's book, Inside Running: Basics of Sports Physiology he showed the monstrous effects a marathon can have on muscle cells. Muscle biopsies of a runner's muscle before and after pounding the pavement for 26.2 miles suggested an image of a mitochondria-sized grenade having gone off.

But you don't need to see Costill's slide because the damage reminds when you take the stairs, handrail firmly clenched going either up or down, the days after a race. So perhaps you've taken the cue from a physical therapist, a coach or favorite pro, and you make it part of your post-race routine to take schedule an ice bath. It goes something like this: You fill the tub up halfway up with the cold water you can get flowing, then dump in a few buckets of hotel ice. Let the ice melt and temperature plummet. Then submerge, for 15 or 20 minutes, time that goes by with hourglass excruciation.

With that in mind, this may be good news or bad news: Last year, researchers at the University of Queensland's School of Human Movement and Nutrition Sciences performed a thorough study, published in The Journal of Physiology, where 21 physically active men were subjected to 10 minutes in an ice bath after their workouts over the course of 12 weeks.

The results were clear when a control group, who trained but didn't do the ice bath, fared significantly better than the ice bath group. According to Dr. Jonathan Peake, the study showed that the recuperative skills of satellite cells were clearly blunted by the ice treatments.

As he told Science Daily, "This is the most comprehensive study of its kind and the results suggest individuals who use strength training to improve athletic performance, recover from injury or maintain their health, should reconsider using cold water immersion as a recovery aid."

The Queensland research was in sync with a 2012 British Journal of Sports Medicine study that took trainers and physical therapists to task for the universal adoption of icing as first aid to acute injuries in athletes. "Ice is commonly used after acute muscle strains but there are no clinical studies of its effectiveness," the study declared. Their review of the existing data on icing, they added, "suggest that topical cooling, a commonly used clinical intervention, seems to not improve but rather delay recovery from eccentric exercise--induced muscle damage."

Experts have offered up other concerns about icing. For example, that icing actually extends swelling as opposed to reducing it, and also that it interferes with the connection to the brain. For example, you injure your knee and immediately freeze it with a bag of ice, possibly cutting off a therapeutic response that includes beneficial hormones.

But the central complaint on icing is that it slows down blood flow into and out of the region. This reduces the flow of nutrients in and waste products out.

Same with the ice bath. It may feel like you're doing something proactive when it comes to the goal of mitigating the physical stress of hard training, but in fact it might actually be screwing up the natural healing processes at work. It may be setting you back.

This is bad news in that it was nice to believe there was a tool to help counter the general feeling like you've been crushed by a runaway cement truck, but the good news in that you can guiltlessly cut a ritual that is something less than enjoyable.

Studies have put the recovery process under the microscope, with a stopwatch. Do a monster workout or a hard race, and about three hours later, a class of white blood cells generated in the bone marrow--neutrophils--are deployed to the stressed tissues. Neutrophils are the first responders of the inflammatory system, following chemical signals as they pass through both blood vessels and interstitial tissues to get to where they're needed. For up to 24 hours, neutrophils busily clean waste products out of the cells and blood. Lymphocytes join in after about half a day and continue restoration for up to three days.

When it comes to the circulation of blood and lymph, more is better, and this is one reason why compression technologies have become standard in performance athletics, with compression socks, tights, and NormaTec inflatable compression. The general idea is this: Wearing compression after a workout will increase venous blood flow and thereby improve recovery. Bam.

A 2015 study on compression socks was more specific to triathletes. Published in the Journal of Strength and Conditioning Research, the researchers wanted to see what recovery enhancements, if any, were enabled by compression wear. Thirty-three runners were given a graded treadmill test two weeks before and two weeks after their marathon races. The tests were the real thing: Runners had to go to exhaustion, where their maximum heart rates were recorded.

The test group wore a pair of compression socks for 48 hours following their marathon efforts. The control group wore a set of placebo socks for the same period of time.

The results were striking: "In the compression group, average treadmill run to exhaustion time 2 weeks after the marathon increased by 2.6%," the research team wrote. "In the placebo group, run to exhaustion time decreased by 3.4%." One of the leading manufacturers of technical compression wear for triathletes is 2XU. Within their line is a pair of compression tights specifically made for recovery. The idea of medical compression is that the tight or sock acts like another layer of muscle, reducing the cavity of the veins and increasing circulation pressure. I would describe the feel of 2XU tights exactly like that: a very thin extra layer of muscle, shrink-wrapping your legs. Using Invista Lycra for the fabric, 2XU provides gradients of compression designed with the idea of flushing blood from the legs toward the heart. As 2XU states on their website, their "Recovery Compression Tights" are just that--designed strictly for recovery, not for use in races or while training.

From what I've gathered, the trick to using recovery compression effectively is to make it a habit--to view every moment that you're not training or racing as a moment that you could be using to accelerate recovery. Wearing the socks to work, for example. And then cruising around at home in the tights and even wearing them to bed. Significant others might have something to say about that, or at least think it's a bit weird. But that's triathlon.

Anything is better than an ice bath.