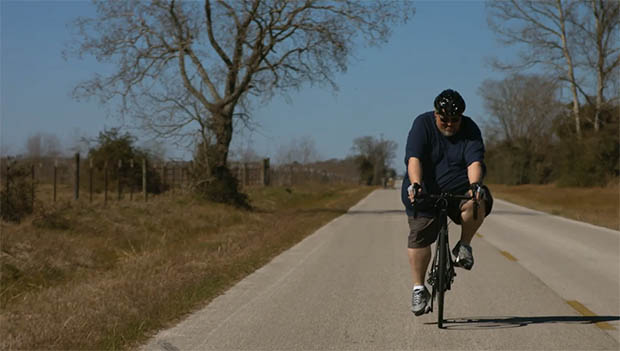 From your first sprint triathlon to your fifth IRONMAN, there's really nothing like crossing the finish line and completing a goal you've worked so hard towards. For Marcus Cook, the idea of completing a triathlon, let alone a 5K, was something he never considered. After weighing in at nearly 500 pounds, a stark reality check from a close friend battling cancer motivated him to take back control of his life. One bypass surgery and countless hours of training later, Cook crossed the IRONMAN Texas finish line weighing 225 pounds, inspiring many people battling with weight issues to follow suit.

"A close business friend pulled me into his office and told me, 'I'm dying because of cancer, you're dying because you have a choice.'"

Marcus Cook was born in Houston and grew up in east Texas. His dad was a preacher, and Cook spent much of his childhood in the church where he fostered his natural singing ability. After a failed attempt at a music career, Cook began his career in the pipeline oil and gas industry to provide for his family. It was here where his lifelong battle with his weight reached an all-time high.

"When I got married, I was 285 pounds, and throughout the years in the oilfield industry I ballooned up to close to 500 pounds," Cook says. "When my company was being acquired, a very close business friend, Chuck Dallio, pulled me into his office and told me, 'I'm dying because of cancer, you're dying because you have a choice.'"

Dallio's comment sparked a lightbulb moment that forever changed Cook's trajectory. He knew he had an issue with his weight but never knew how to address it. After reflecting on the success and failures of his life, Cook decided something had to change.

"That same week I saw a picture of myself, and I realized that I had failed myself because I had segmented my life—I was successful in business and marriage, children and making things happen, but I had failed my health and body," Cook says. "So that week was the week I stopped segmenting my life and started realizing that I needed to be successful as a whole, as a human was intended to be."

First, he had to address his diet. Cook drank six to eight Sprites and would eat roughly 5,000 calories of processed foods each day. He also consumed alcohol every night—generally a couple of beers or a couple glasses of wine. His personal life revolved around activities that included food and minimal physical exertion.

"Mostly, my hobby was eating out," Cook says. "I would find fancy places to eat and weekends were based on where we were going to eat."