Breaking Down the Triathlon Distances 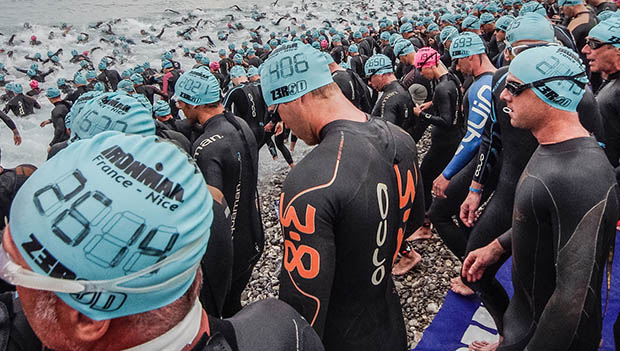 Swimming, cycling and running are three sports anyone from about four years old and up can enjoy. But while each are relatively simple in theory, combining them involves a lot more than meets the eye. From the outside looking in, many non-triathletes are only familiar with the "Hawaii IRONMAN" that's broadcasted on NBC every year. For people within the sport though, it's clear not all triathlons are created equal—races can take anywhere from one hour to 17 hours to complete.

From the super sprint to an IRONMAN triathlon, we've simplified the five most common triathlon distances and what to expect in each. Note that these distances can vary depending on race logistics or weather conditions.

Perfectly suited for beginners looking to complete their first triathlon, the super sprint distance is the shortest triathlon at most venues. It usually consists of a 500-meter (0.3-mile) swim, a 10K (6.2-mile) bike and a 2.5K (1.6-mile) run.

This format generally starts separately from longer distances (you won't have to swim with a lot of other athletes), and buying new gear isn't necessary. Of course, you'll have to have the basics (goggles, helmet, running shoes), but renting or borrowing a bike from a bike shop or family member is perfectly acceptable. Don't worry about being aero or high-performance—finishing is what matters most here.

A sprint triathlon can have a wide range of athletes toeing the line—from beginners who are competing for the first time to highly-competitive athletes looking for a PR. No matter your approach, this distance is easy to train for and doesn't require high-end gear to finish.

If you have a few sprint finishes under your belt, an Olympic-distance triathlon is the next logical step in your triathlon progression. Formerly called "international distance," the name was changed prior to the 2000 Summer Olympic Games in Sydney when triathlon debuted in the Olympic program.

Its distances are standardized, with a 1.5K (0.93-mile) swim, a 40K (24.8-mile) bike and a 10K (6.2-mile) run. This distance can be highly competitive with athletes specializing in it, but there is always a mix of skill and experience levels on the course. Generally, drafting on the bike course is against race rules, but some Olympic-distance triathlons allow it (draft-legal).

A half IRONMAN, or middle-distance triathlon, is exactly 70.3 miles in length. It features a 1.2-mile swim, a 56-mile bike and a 13.1-mile run and is longer and much more demanding than a sprint or Olympic-distance triathlon.

This format requires significantly more training, and athletes will benefit from performance gear, including a triathlon-specific bike and tri suit. A half IRONMAN is a challenging race that can take up to eight and a half hours to complete—although finishing is obtainable after a completing a structured training program. A 70.3 is a great distance for athletes who specialize in endurance over speed and is a compromise for athletes who like high-mileage racing without committing to a full IRONMAN training plan.

As we mentioned, an IRONMAN is probably the most famous triathlon distance—most notably the IRONMAN World Championship in Kailua-Kona, Hawaii. Founded on Oahu in 1978, IRONMAN originally combined the three hardest one-day events on the island. Since then, it has exploded into a global phenomenon, with races in Europe, North America, South America, Africa, Asia and Australia.

Double its 70.3-distance sibling, an IRONMAN is 140.6 miles long and consists of a 2.4-mile swim, a 112-mile bike and a 26.2-mile run. This race requires a substantial amount of training and preparation to successfully cross the finish line, with many triathletes regarding an IRONMAN as their "dream" race. All athletes have 17 hours to cross the finish line where they will be met with the iconic words, "You are an IRONMAN!"

Note that not all 140.6-distance triathlons are called IRONMANs but rather just races organized and run by the IRONMAN brand.

Looking to take on a triathlon, find one near you.