How to Steal a Set in Doubles 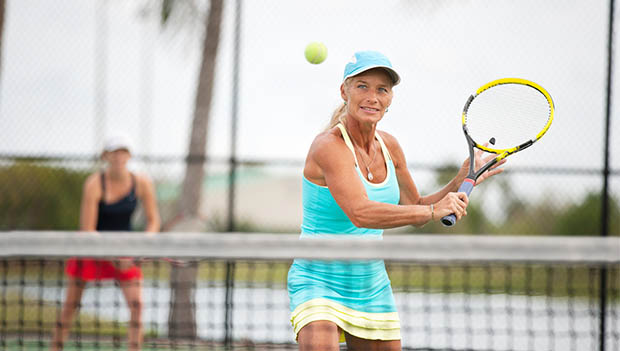 It's actually quite simple:

More: 3 Shots You Need for Doubles—and 3 You Don't

In step one, you capitalize on the pressure inherent in the moment with pressure tactics. The elements of surprise and uncertainty create pressure. So this is a good time to do something unusual.

Aggression creates pressure. So this is the strategic time to show it. Which pressure tactics you use depends on your game.

In step two, you waste no time congratulating yourselves about the big game you just won. Instead, you instantly hustle to shag the balls and quickly get into position, champing at the bit to start the next game.

Why? Because in less than a minute, a 4-3 set that has been running neck-and-neck for forty-five minutes can suddenly be history at 6-3. It happens before the opposition FEELS like they're losing. That's because it happens during a letdown.

It happens so fast that the losing team invariably seems surprised by the loss of the set. They literally blink with jaw-drops that seems to say, "How did that happen?"

Mentally, yes, they had known the score, but that knowledge lacked the appropriate emotional impact. So, they didn't yet appreciate their imminent danger of losing the set. It's like you stole it while they slept.

But all you did was use your "killer instinct." You applied strategic pressure at the magic moment of the battle.

Then you kept up your own intensity during the subsequent natural letdown, and you exploited the opposition's momentary lapse of concentration to get some precious points cheaply at a decisive point in the match.

READ THIS NEXT: Court Positions for Doubles Tennis