Why You Should Volunteer at a Race 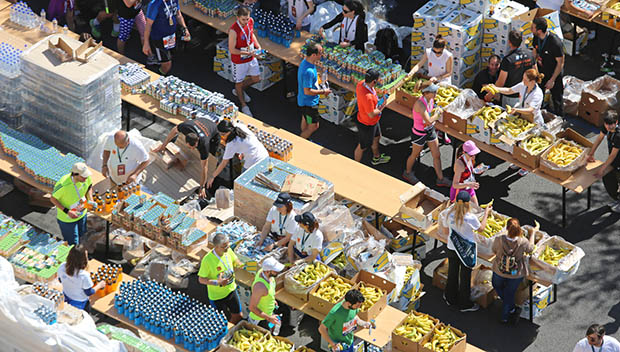 If you've never volunteered for a race or have run many more than you've helped out at, it may be time to change that. Why? Because events simply cannot happen without volunteers. Your local race desperately needs you! And you just may need it too...

To get a sense of what goes into putting on a running event, we interviewed staff members associated with two very different races. Scott Bock is the creator and race administrator for the Chasing Bigfoot 25K, which takes place in July on a portion of the Gandy Dancer Trail, beginning in St. Croix Falls, Wisconsin. Bock is essentially a one-man shop and describes his race as "totally grassroots." Only around 30 runners have participated in each of the two years the race has been run, and there's not yet an official website or online registration. Still, Bock manages to put on a professional race.

"People don't really know what to expect, and some of them are surprised when they show up and see the timer, the bibs and the water stations," Bock says. In addition to those amenities, finishers also get a T-shirt (mailed to their address within two or three weeks of the race) and medals, which Bock made by hand each of the past two years. "One year, I cut and hand-stamped leather for the medals, and this year I made them out of small wood cross-cuts."

While Bock shoulders the majority of the work, he says he couldn't do it alone. A small handful of volunteers help him set up and tear down the start and finish area and the course on race day, bake cookies for post-race snacks and man the turn-around water station at the 12.5K mark. "There are water stations every 5K, but the only one that's manned is at the turn-around point," Bock explains. That's how he keeps track of the runners, too; the volunteers at the last water stop communicate with him by radio to verify that each runner who starts the race safely finishes.

On the other end of the spectrum is the Medtronic Twin Cities Marathon, coordinated by the non-profit Twin Cities In Motion. The race, which ranks among the country's 10 largest, serves more than 7,400 finishers each year. Kelli Haapala, the volunteer and community outreach manager for Twin Cities In Motion, is one of 25 paid staff members who work year-round to make the marathon—and its other events—happen.

"We're expecting around 4,000 volunteers on race weekend this year," Haapala says, noting the Medtronic Twin Cities Marathon Weekend of Events also includes a 10-mile race and several family events. Just let that sink in for a moment: four thousand volunteers. "Safety is the top priority for us, so we try to have a volunteer stationed at every driveway and intersection along the route and for our runners to never be out of the line of sight of a volunteer." That's around 400 volunteers just for route safety! When asked what other types of roles volunteers fill before, during and after the race, it took several minutes for Haapala to list them all.