This Clip on Wearable Wants to Be Your Running Coach 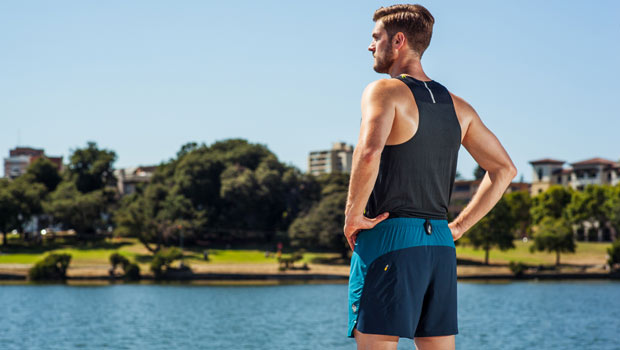 At some point, everyone has been there. Out for a run, feeling good, the everyman runner figures they must look something like…

Instead, much to his or her surprise, the reflection in the storefront window looks a little more like…

It’s funny, until you consider that your flawed running form may be hurting more than just your mile split. Common mistakes like overstriding and pelvic over-rotation can lead to injuries that sideline a runner for weeks.

To the rescue comes Lumo Run, a Bluetooth-enabled sensor that clips onto the back of your pants and pairs with your phone. The app collects data over the first 10 minutes of your first run, learning your tendencies, speed and the overall quality of your form.

From there, your virtual running coach is on the job, monitoring your form and grading you across five metrics: cadence (steps per minute), braking (the amount of forward resistance caused by each foot strike), bounce (the distance, up-and-down, that your hips move), along with your pelvic drop and rotation.

Lumo Bodytech CEO and co-founder Monisha Perkash found herself dealing with injuries due to flaws in her own form—circumstances that ultimately led to inspiration.

“I am an avid runner and I was getting lots of injuries from running,” she says. “I was able to hire a running coach. But not everyone has access to a personal coach.”

“The product is useful for runners across the entire spectrum, from the casual to the elite,” says Perkash. “Whether they’re looking to improve their speed or prevent injury, it all comes back to proper form and running efficiency.”

According Dr. Rebecca Shultz, Lumo’s in-house biomechemist, the Lumo algorithm team, in partnership with Loughborough University, tested the data of over 80 athletes using a motion capture system to validate the device so that it not only monitors the form of its users, but also provides real-time critique and encouragement.

Too much pelvic rotation? The runner’s personal Tinkerbell may instruct them to pretend they’re running through a narrow tunnel. Not enough foot turnover? Imagine you’re running through a puddle and trying not to splash. Each run comes with a focus point from one of the five metrics, with dialogue occurring frequently enough to be effective, but not so much that it becomes distracting.

Over the long haul, Perkash and Shultz see Lumo Run as the leader of a next generation of fitness trackers that provide more than just mileage and pace.

“We see Lumo Run contributing to an entirely new body of science,” Perkash says. “Gait labs are a great starting point, but, going forward, we are connecting data on millions of runners in their natural environment.

“We look at the wearable sector and we see wearable 1.0 as an activity tracker. But, so what? We see ourselves leading wearables 2.0, where we gather data that no one else can and we also answer, ‘so what.’ Your braking was outside of your target zone—so what? Here are some things you can use to improve that—both through in-run audio queues and post-run.”

The coaching doesn’t stop when you stop running, either. The app also provides post-run workouts aimed at strengthening muscles and establishing the flexibility necessary to perform at optimum levels.

“The way we look at classical biomechanical movement patterns has changed,” says Perkash. “You first need to have the strength in your muscles. In order to use that strength, your brain must know to recruit that muscle, and then you have to be aware that it’s there and should be used a certain way.”

The Lumo Run clip-on sensor is available for $99. While it may be a bit much for the casual runner, it’s the perfect virtual coach for any runner training for a race—or who simply loves to run and does so frequently enough to risk injury with incorrect form.