The Best Running Cities in the U.S. 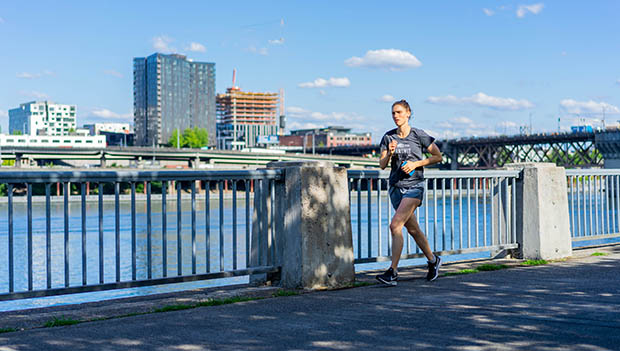 Determining "the best" of anything can be a subjective exercise, but if you're a runner, it's pretty easy to identify the things that make a place hospitable for logging miles. Often topping the list are safe routes, good company, and decent weather. Whether you're looking for dirt trails and plenty of nature or a vibrant racing scene and options for a post-run cold brew, we bet one of the following cities will fit the bill. While this list is by no means exhaustive, it might provide some inspiration if you're considering a move or an active vacation!

NYC is a concrete jungle, but it's still a great place to run. The Big Apple is home to New York Road Runners, one of the oldest and largest running organizations in the country, as well as the world's biggest marathon. With that type of infrastructure, it's easy to find a running club or race to add excitement to your training; at last count, the city boasted over 80 RRCA or USATF-sanctioned events. If you're looking to log miles, the paths in Central Park, Prospect Park and on the West Side Highway are stand-bys that get plowed even on the messiest of winter days. And luckily, NYC's extensive public transportation system makes destination or point-to-point runs a breeze. Plus, if you're looking to carbo load or refuel from a run, the city's famous bagels and pizza are sure to get the job done.

This gem in the Pacific Northwest boasts hundreds of miles of bike and running paths, as well as Forest Park, the biggest natural park inside an urban area. Locals also love the flat paths along the Willamette River. In nearby Beaverton, you can find Nike's headquarters, and the OG running company's influence can be evidenced by the number of elites and Olympians living and training nearby. Portland's winters are relatively mild, so if you want to avoid snow, slush and icy roads, you'll be right at home.

Home to America's most iconic marathon, Boston is a runner's dream on Patriot's Day—a.k.a. Marathon Monday. Whether you're a runner or a spectator, the day is truly unforgettable. For the remaining 364 days of the year, choose from 18 miles of trail along the Charles River or link up with one of the area's 15-plus running clubs. New to the scene is Tracksmith, a small running apparel company based on Newbury Street in Boston's Back Bay neighborhood. Its "track house" meeting spot hosts weekly events and group runs for the community. If the track house isn't your scene, there are countless Irish-style pubs to visit if you need a post-run meeting spot.

With over a dozen running clubs and foggy, cool summers, San Francisco is an endurance athlete's Mecca. It's rarely too hot, and the Bay Area's winters are mild. For a classic trail running experience, head to the Lands End Coastal Trail or explore endless options across the bay in Marin County. Prefer a flatter route? Historic Kezar Stadium is home to a near century-old track (and is the workout spot of choice for many area running clubs). The city hosts its own marathon every summer, but for a unique experience, don't miss Bay to Breakers, a 12K event that feels more like a party than a race. When you're ready to refuel, the food and restaurant scene in San Francisco is unparalleled—whether you want seafood, tacos or gourmet bread, the city won't disappoint.

Known for its lakefront location, soaring skyscrapers and deep-dish pizza, Chicago is a great spot for a run. When you want to go long, take advantage of the 18 miles of flat, paved lakefront trail. Bonus: There are bathrooms, water fountains and skyline views for days. The second city is home to multiple running stores, as well as a number of running groups. The Chicago Area Runners Association is a non-profit that serves and advocates for Chicago's running community. It hosts a number of races and events throughout the year and played a founding role in what is now one of the world's fastest races, the Bank of America Chicago Marathon.

Its growing technology industry has made Raleigh a hot spot for young professionals. Add in mild winters and close proximity to mountains and nature and you have a great place to live, work and run. With more than 100 miles of primarily paved trails, you'll never get bored at The Capital Area Greenway. Alternatively, head to Dorothea Dix Park for views of Raleigh's skyline or the Neuse River Trail for 20-plus miles of trails and bridges. Once you've picked out your new favorite route, link up with locals through one of the area's running clubs. The Raleigh Brewing Run Club is a favorite for beer-lovers. And if you want to test your fitness, don't miss the City of Oaks Marathon and Half Marathon, held in downtown Raleigh.

READ THIS NEXT: The 100 Best Running Routes in the U.S.