Running Form: Midfoot Strikers vs. the Balls of Your Feet 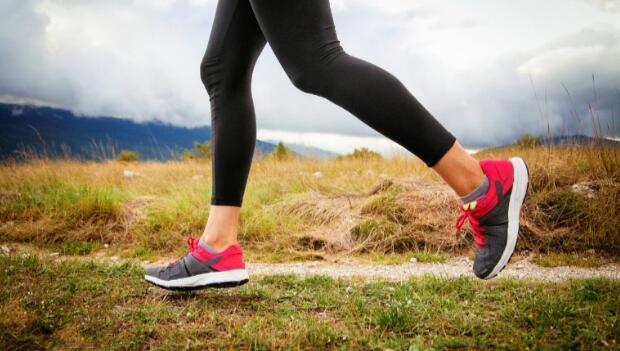 There seems to be quite a debate going as to which way of running is best, with a midfoot strike or running on the balls of your feet. My response is that one is not necessarily better or worse than the other because they are used for different situations. In ChiRunning we focus on the midfoot strike as we primarily support people who run for longer distances, meaning more than one mile.

My take on the difference between running on the balls of your feet (BOF) and running with a midfoot strike (MFS) is that the human body was initially designed (or evolved, depending on your belief system) to be able to respond to the needs of the moment. Here's an example of how it might have all started. I want you to visualize being chased down by... OMG... a saber-toothed tiger! I think that we'd all agree that the best way to run would be at a lively, full-on sprint...on the BOF. That's why it's called the "fight or flight response."

Running to escape danger kicks in your sympathetic nervous system and triggers your body to produce adrenalin so you can make a quick get away. Your body also kicks into a high-level glycogen burning mode because you really need something akin to rocket fuel to get out of there. Running this speed for more than about a half mile also raises your blood pressure rate as a result of insufficient oxygenation (shallow, fast breathing), which ultimately overloads the adrenal glands and breaks the body down (that's why it's called an anaerobic pace).

Now visualize this scene: You're living in the same time period as the poor fellow in the first example except you're not being chased, but you're hungry for a steak dinner. Now, if you have only very primitive weapons available to you with which to be the hunter (instead of the hunted) you would probably have to resort to chasing down a deer for dinner, (or some other animal that depends on speed for safety) in which case your goal would be to outlast that poor little short-twitch critter by chasing it at a comfortable pace but not stopping to let the animal rest. When an animal is exhausted, it's easier to catch and kill.

This slower mode of running allows you to breathe more deeply which kicks your body into a parasympathetic response, producing those nice, blood-pressure-lowering drugs serotonin and beta-endorphins which in turn produce an overall calming effect and feeling of well-being.

Running in this mode does a couple of other things. It lowers your blood pressure and begins to burn a very economical fuel-mix of glycogen and body fat, since you're going to be running slower but longer. This more relaxed mode of running requires that you run with--you guessed it--a midfoot strike. This is not to say that you can't run fast with a midfoot strike. The Kenyans seem to do just fine doing a midfoot strike and holding a sub-5 minute mile pace for a marathon distance!

OK, you can tell everybody you heard it here first... there are definitely times when I run BOF! That's right. When I'm out trail running and I come upon a short steep section of trail with lots of roots and loose rock, believe me, I have no qualms about prancing through it on my BOF. But, I know that I'm not going to be on my BOF for more than a few seconds at the most, so I have no problem with it. I won't be stressing or injuring my calves by doing anything more than a little "dancing." I also know better than to try to run more than a very short distance BOF because it is neither an economically or ergonomically efficient way to cover long distances.

What does it feel like when I run any distance BOF? I feel lots of tightness and fatigue in my calves and shins because I'm using them more. What's the Body Sense if I run for a long distance BOF? Pain and fatigue, which is my body telling me that something isn't quite right about what I'm doing.

Now, I could simply train my lower leg muscles to get strong enough to handle this way of running, but why would I want to train my body to work harder than it needs to just because I'd rather not listen to what it's trying to tell me? For running longer distances, the MFS is really the most economical way to run, as well as also being easier on my legs.

In ChiRunning, when you lean from your ankles and when your foot lands under your body of mass and immediately swings out the back, you will be landing with a safe, efficient midfoot strike. If you are reaching with your legs, are upright or leaning slightly back as you run, as most people do, you will be heel striking and most likely pushing off  the balls of your feet to propel yourself forward. This is not efficient and can cause a host of injuries if done for more than a very short distance.

The BOF and the MFS both came about from their respective needs and one is not better or worse than the other, simply because they each have their own specific applications. If you try to use one to do the job the other was designed for, you'll be working against the "laws" of the body and you'll either burn out your legs by running BOF for long distances... or have the other problem of trying to sprint with a midfoot strike to save your life...in which case you might just get eaten.

Not to be used or reprinted without express permission from the author.