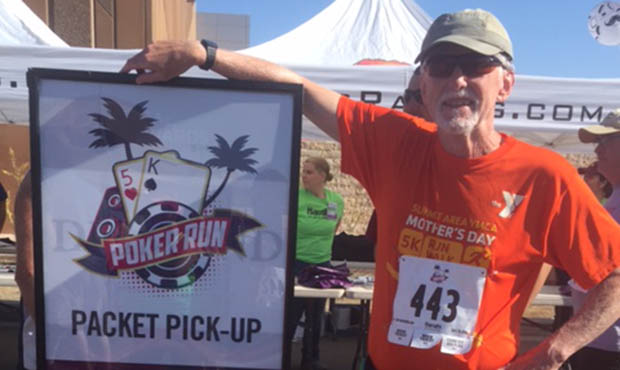 Richard Bleecker is no ordinary runner.

He hasn't broken world records or run a marathon on every continent, but for the last two decades he has stuck to one impressive goal: running at least one official race per month, no matter what.

Through cataract surgery, hip surgery and everything else life has thrown his way, Bleecker, now 76 years old, has run a total of 278 consecutive races over the last 23 years, and he has no plans of stopping anytime soon.

Bleecker arrived at running the way many Americans do.

While in his 30s and living out a life as a self-proclaimed, full-fledged workaholic, Bleecker started to notice how unhappy his lifestyle was making him.

At the time he was an executive director at a non-profit agency, and to deal with the stress of his job, he was smoking, rarely exercising and growing what he called an "inner tube" around his waist, thanks to his excessive eating habits.

The time came to make a change.

First, he dropped smoking and tried to be more moderate in his eating and drinking behaviors. He began walking and eventually worked his way up to light jogging.

But Bleecker didn't rush the process, a choice to which he credits his success. It took about four to five years until he even felt comfortable running a full 30 minutes without stopping.

Eventually, he put his hard work to the test with his first 5K.

"It was a very exhilarating and liberating experience," he says. "There were women and men of all ages. I remember it to this day."

Bleecker was hooked. He eventually worked his way up to a 10K, a half marathon and even his first full marathon.

One Race Each Month

Bleecker went on to complete seven marathons in seven years. But after his eighth, he worried he was pushing his body too far.

To fill what he described as an "empty place" in his life, he committed himself to a new challenge: running one race—any race—each month.

"It made me aware that I had to keep myself in shape," he says. "I had to continue to be careful about how I ate and drank and that I got enough sleep. It helped me get out of bed in the morning and go out and do a run instead of turn off the alarm clock. It was like, 'An apple a day.'"

Bleecker has now sustained this commitment for the last 23 years without breaking his promise. His closest call, he says, came when he needed hip surgery, but luckily he was able to plan ahead. He ran one race early in the month—the day before his surgery—giving him the fully allotted time to recover and be medically cleared before his next race.