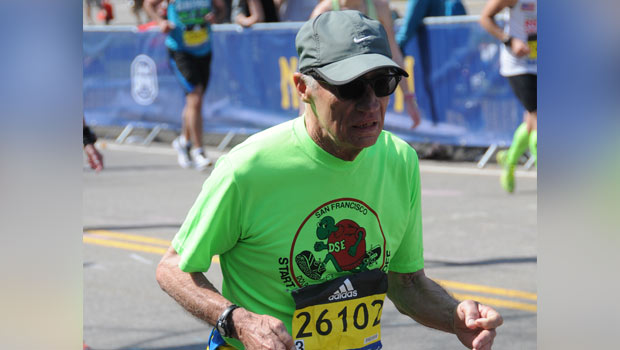 Number of marathons completed: About 20

Age when running career began: Teens, then a hiatus before returning at 35

When Sam Roake ran Boston last year, finishing in 4 hours and 39 minutes, he thought it would be his last time.

But Roake is back for one more run in Boston. Maybe.

“I keep saying it’s going be to my last, but who knows.”

He started running in high school, but then took a break before picking it back up again in his 30s.

Roake believes modest mileage—about 25 to 30 miles a week—and training mostly on soft trails has prevented him from being sidelined with injuries over the years. Still, marathon training is getting harder on his body as he gets older.

“I don’t think I would be doing it if I was doing it by myself.”

Roake says he sometimes struggles with motivation, but his team, Dolphin South End Runners—coincidentally, the oldest running club in San Francisco—keeps him running.

“I don’t think I would be doing it if I was doing it by myself,” he says.

It also doesn’t hurt that he has a lot of fans on the local running scene who marvel at his resilience. “Now I’m getting to be sort of a celebrity,” he says, laughing.