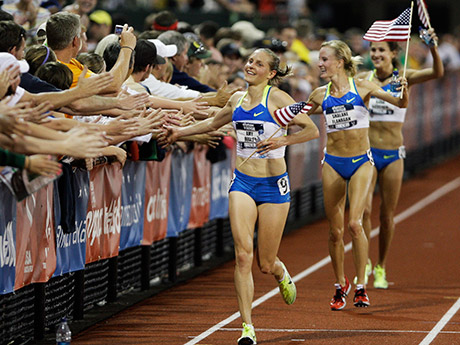 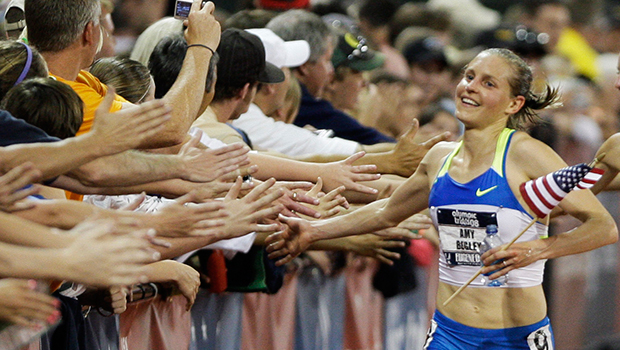 In the coming weeks, runners all over the country will lace up and stand nervously at a starting line—staring down the gauntlet of 26.2 miles.  Those 26.2 aren’t a beginning, though; they’re the end of a journey that began many months and miles ago.

Getting your mind and body ready for that last effort is the trick pursued by elite and casual runners the world over.

Elite runner and Olympian Amy Begley is well-known for her dramatic last lap sprint to make the 2008 Olympic team in the 10,000 meters.

That tenacity has carried over into her post-professional career first as head cross country coach at the University of Connecticut and now as coach at Atlanta Track Club since 2014. Here, Coach Begley shares her world-class tips to help runners be their very best on race day.

Q: What was it like to transition from coaching 11 girls in XC at UCONN to coaching Atlanta Track Club with over 26,000 members?
A: It’s always a learning experience. Atlanta Track Club has training programs year-round and with the larger groups, the biggest change has been going back to the beginning to teach people the basics of running— the vocabulary, how to talk people through the little things, and how to teach someone who hasn’t ever done it before. I’m learning that everyone has their own journey and has come to running for different reasons. Finding that reason for them and helping them stay with it has been the biggest lesson I’ve learned in coaching this many people with such a variety of ages and personalities.

Q: The Rio Olympics just wrapped up—what’s the one thing you feel is missing from the support system needed in the U.S. to get more people ready to compete in the Olympics?
A: USATF has done an amazing job the last eight years of supporting what they call the podium athletes—the athletes who have the biggest potential to finish in the top three at championship events. The gap that I see is with the developmental athletes—those athletes coming out of smaller colleges where they race two, three even four times in one meet and they don’t have the support system of a major program. That’s where clubs like Atlanta Track Club Elite come in. We’re providing support to those athletes who are ready to make that jump to the national and international level. A lot of promising athletes give up running after college or they try to run while working 40-50 hour a week jobs. Yet most Olympians are runners who are in a group, have shoe contracts and the financial support that they need to be able to run full-time.

We are trying to support those developmental athletes with money for shoes, gear, travel, massage and self care and with a world class athletic facility and coaching staff—and of course there is the social support of being part of our elite training group.

Q: Most of us amateur runners don’t have the access and support that Olympians do—what is one tip that you’d give amateur runners about how to train like an Olympian while working with the resources we have?
A: My number one tip is to get some stretching in! Most of us are sedentary during the day so doing the dynamic flexibility exercises before you run, stretching the “Big 5” after (quads, hamstrings, hip flexors, glutes, calves), and foam rolling every other day go a long way towards helping you stay healthy.
My second tip would be embracing the ice bath after your long run or a mid-week workout where you are especially sore. If you’ve never taken an ice bath before, it’s exactly what it sounds like. Fill up your tub with cold water and then slowly add ice. It’s important to not let the water temperature dip below 52 degrees and don’t stay in for more than 15 minutes. To stay warm, I recommend wearing a sweatshirt and maybe even a hat.

A lot of people will try to do too many things at once and eventually their body comes to a breaking point.

Q: What’s the biggest mistake you see beginner marathoners make in training?
A: A lot of people will try to do too many things at once and eventually their body comes to a breaking point. They try to do more than one or two marathons a year and then also add triathlons—instead of slowly adding things in, they want to do it all right now. Another mistake I see is that runners often get antsy and nervous that they won’t be able do the mileage on race day, so they’ll try to do week after week of 20+ mile long runs during training and eventually their bodies break down. They don’t have to do that many 20+ milers. They just need to trust their training and not get too anxious or overzealous.
NEXT