How to Adjust Your Race Goals in Less-Than-Ideal Conditions 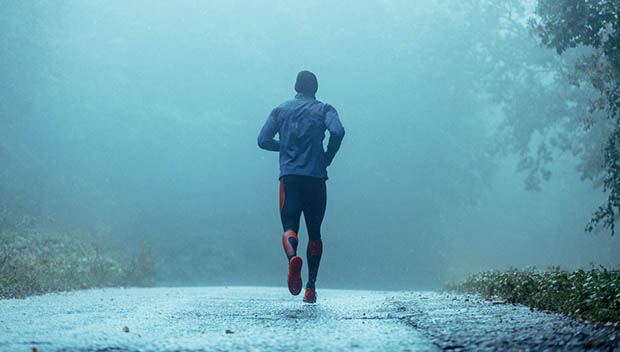 For most marathoners aiming to set a new PR, it’s safe to say two of the biggest factors that play into how they decide on their race are the course terrain and climate. While you can control the former, it’s not all that uncommon to go in expecting a location’s typical weather conditions for the season and end up getting served with the polar opposite.

I speak from experience. I run the Houston Marathon and Houston Half Marathon, which take place in mid-January and late-October, respectively, every year. Most of the time we’ve gotten typical (read: perfect) race temperatures of 40 to 50 degrees, but there have also been a handful of years where it’s ended up being 70 degrees with 100% humidity at the start, which is less than ideal to say the least. I’ve learned the hard way that if my body has gotten used to practicing my goal paces in more favorable conditions, I will likely regret still going for it anyway on a hot day. This was the case for the 2017 Houston Marathon, where I ended up run-walking a painful last 10K, finishing more than 15 minutes slower than the PR I’d set the previous year.

Now that I’m 10 marathons and more than 30 half marathons into my running “career,” I’ve wised up and learned the importance of having a Plan B. Last year I was registered for a 30K race leading up to my marathon, which ended up being another surprise summer day in December in Houston. My original plan was to practice my goal marathon pace (8 minutes per mile), but with the warm conditions, I purposely started 30 seconds slower than that and worked to bring it down in the second half. I ended up running the final two miles at that original goal pace and didn’t feel completely awful by the end. This gave me confidence about having a Plan B strategy (for a time that would have still been a PR) in my upcoming marathon should it have also had warm conditions.

Rebekah Mayer, a Minneapolis-based USATF Level 2 endurance coach, National Run Program Manager at Life Time Run and a 2:59 marathoner, has also had to learn this lesson through personal experience.

“I’ve done several hot races where I’ve come from either fall or spring conditions in Minnesota, going from temperatures in the 30s to 70 degrees on race day,” she says. “When I tried to execute my original race plan anyway, I ended up fading a lot in the final miles. I’ve since learned that taking big risks and trying to earn every second could yield cramping up, blowing up and having to walk it in.”

Here are five tips from Mayer to help you prepare yourself leading up to your race.

Try to Acclimate to Warmer Conditions

Mayer most recently ran the Miami Marathon in January (where she also placed third overall), which she knew would be much warmer than the winter conditions she was used to during training in Minnesota. She did a significant amount of her training indoors on the treadmill not only to avoid running on ice and snow but also to better simulate the outdoor temperatures she would experience in Miami. When she did go outside, she also wore more layers than she normally would for a winter run to get a better feel for running when it’s hot.

“I found training inside worked better for me because I would tend to overheat without even feeling it with more clothes and would ultimately end up cold and sweaty,” she says. “As a result, I moved almost all of my training indoors in my last three weeks before the race, which I believe really helped me be prepared for race day.”

Mayer recommends trying to do about a two-week block of treadmill training close to your race date. If you have access to a steam room or sauna in a gym, she also recommends spending a few minutes in there after a treadmill run, assuming it’s safe for you and you don’t have any preexisting conditions that could make it dangerous.

“Incorporating the treadmill, steam room and sauna time into my training helped me have much less fade in the last 10K of the race,” she says. “I still slowed down, but not nearly as much as I had in the past. I did not expect it would end up going as well as it did, so that was fun.”

Whether or not you’ve been able to incorporate heat acclimation into your training, it’s always smart to adjust your race day goals to some degree if you get served with hot conditions. It can be disappointing to have to set aside a time you’ve been visualizing for months, but it’s key to remember that you’re putting your body through additional stress in the heat for 26.2 miles, a distance you more than likely did not complete in training. By purposely backing off in the first half of the race, you’re more likely to have an enjoyable experience and might find that you have more energy to pull out a strong finish by the end, Mayer said.

“The heat that our bodies can sustain becomes more problematic the farther we go throughout a race, and starting more conservatively won’t push you to the edge as early,” she says. “It will allow you to make better decisions as you get to the second half—if you haven’t pushed as hard, you may have more left in the tank and be able to pick it up in the second half.”

Be Smart About Your Apparel Choices

On the other side of the equation, you may end up with a race day that’s much colder than you’re used to. While training for colder temperatures can be functionally difficult to do, most people fortunately aren’t negatively impacted by colder race day conditions—in fact, most people end up performing better and not having to adjust their pacing at all because the body warms up quickly and allows you to feel more comfortable than cold without the physical stress that heat can bring.

“If it’s just the temperatures that are colder than expected, usually you just need to be mentally prepared for being a little uncomfortable at the beginning,” Mayer said.

However, if you’re not used to running in the cold, it wouldn’t hurt to wear an extra layer to start at least. You can always shed extra layers if you start to overheat, but you’re usually out of luck if it’s the other way around.

When It Comes to Rain, Get Outside When You Can

For many of us, waking up to rain can make us quickly default to the treadmill (or to skip or move a workout day altogether), but it’s key to remember that a race would usually still go on as planned if it rained. Assuming it’s safe (i.e. no lighting and you’re not planning a speed workout on dark streets), Mayer advises runners still get out there, both for the mental preparation and to figure out how to dress for those conditions to be comfortable in them.

“Ultimately, the best choice is whatever will allow you to safely get the workout done,” she says.

When training in cooler conditions, you might be able to get away with sips of water whenever you come across a drinking fountain. But on a hot day, you’ll undoubtedly need to drink more before, during and after the race to avoid putting your body through distress and becoming dehydrated. You can get used to drinking more on a run by carrying a small handheld water bottle and refilling it every hour or so.

“Add electrolytes to your fluids and drink plenty of fluids in the days leading up to your race are key in making sure you’re ready to go on race day,” Mayer said. “Start your hydration plan early and often in the race and also including electrolytes are important so you don’t end up with a sodium imbalance.”

READ THIS NEXT: Tips for Running in Adverse Conditions