How Coffee Can Boost Your Run 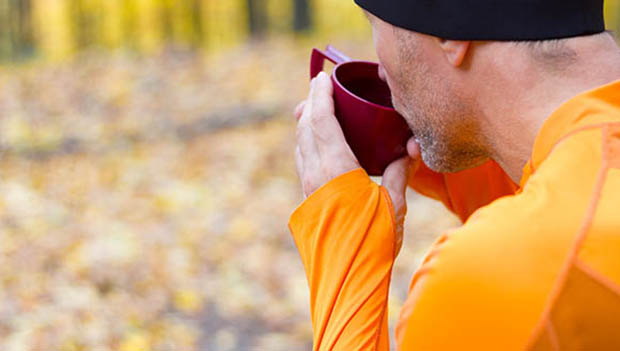 A morning cup of Joe is a runner's best friend but not just because it helps gets you out the door. This caffeinated drink has numerous health benefits that are specifically impactful for runners.

From speeding recovering time and boosting performance to increasing your ability to focus, there are many reasons to indulge in a good brew before heading out for your next run.

Do you ever wonder why your brain feels foggy until you drink that first cup of coffee? Coffee improves your energy levels and reduces feelings of tiredness thanks to its caffeine content. A cup of coffee, no matter what time you drink it, will help you feel more alert and even improve your performance on the day's tasks, including your run.

When your legs feel like Jell-O after a particularly brutal workout, coffee can help with that too. One study found that two cups of coffee can largely reduce pain from delayed-onset muscle soreness (DOMS), helping you get back out there sooner rather than later.

If you're trying to reduce body fat, coffee is worth adding to your diet. The caffeine increases your body's metabolic rate, or the rate at which your body burns calories each day. Over time, this increase in your metabolism can help you shed fat.

Coffee can also shorten your recovery time. When consumed before physical exercise, caffeine can increase the body's anti-inflammatory response system. This system remains elevated for two hours after exercise, helping speed recovery by addressing stress and inflammation in the body.

If you're trying to up your calorie-burn to get fitter, coffee can help with that too. One study showed that caffeine can raise post-exercise energy expenditure, or the calories you burn after exercise is completed, by up to 15 percent.

Believe it or not, coffee can also boost your motivation to run harder. One study, which investigated the effects of caffeine on resistance training, showed that those who ingested caffeine before lifting experienced increased readiness to invest physical effort (RTIPE)—in other words, they felt more motivated. These participants performed more reps and felt less exhaustion.

Numerous studies have shown that caffeine increases physical performance. In one study, researchers observed that the effect on physical endurance was particularly strong. Participants' endurance increased by over 12 percent after ingesting caffeine.

No one wants to stop in the middle of a run to take a bathroom break, which is why many runners choose to drink a cup of coffee an hour or two before their run. Caffeine actually helps stimulate contractions in the colon, which should help you go to the bathroom before you leave the house.

Nothing can mess with your training schedule like a bad mood and low energy, and sometimes a reoccurring bad mood can mean something more serious. Coffee has been shown in many studies to reduce depression. One famous study revealed that the risk of suicide for adults who drank two to four cups of caffeinated coffee per day was cut in half compared to those who drank little or no coffee (or decaf coffee).

READ THIS NEXT: 10 Health Benefits of Coffee