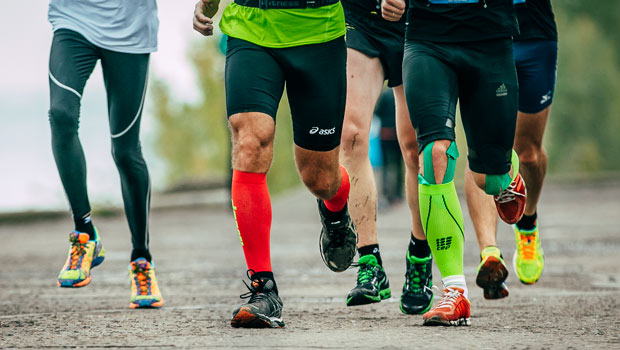 Ask a group of runners about compression gear, and you’ll likely get as many different opinions as there are runners.

Compression garments have long been used in medical practice to help prevent a dangerous blood-clotting condition called deep vein thrombosis in bed-ridden or chair-bound patients, but these medical prophylaxes have enjoyed popularity among runners and other athletes for just over a decade. The running world went crazy over compression socks when Paula Radcliffe wore a sheer pair as she smashed the women’s world record at the 2003 London marathon; and it’s tough to find a photo of U.S. marathon great, Meb Keflezighi, sans socks.

"I wear compression gear for all of my running, no matter the intensity or distance," Keflezighi says. "Some days I wear compression socks when I'm not running... I travel a lot and always pack CEP [socks] so that I can wear the socks while flying."

Keflezighi believes that wearing compression socks on days he does not run aids in his recovery, while flying in the socks helps to prevent his legs from swelling at altitude. But what does the scientific research say?

The Benefits, Real and Imagined

The basic functionality of compression socks is in the application of a graduated level of pressure that is greatest at the foot or ankle and slightest at the top of the calf. This graduated compression reportedly improves blood circulation and prevents blood from pooling in the lower leg. This much has been proven by medical research, but really only among bed-ridden or wheelchair-bound patients who had low blood circulation in the legs due to prolonged inactivity.

Sports scientists began to speculate that compression gear may also provide a host of performance- and recovery-related benefits for athletes. The hoped-for benefits have included: reduced leg swelling and soreness, and improved recovery. Many studies have been carried out to determine the validity of these hypotheses, and, while a few have shown small promise, the majority of the research reveals a sizable gap between what was hoped for and what actually is.