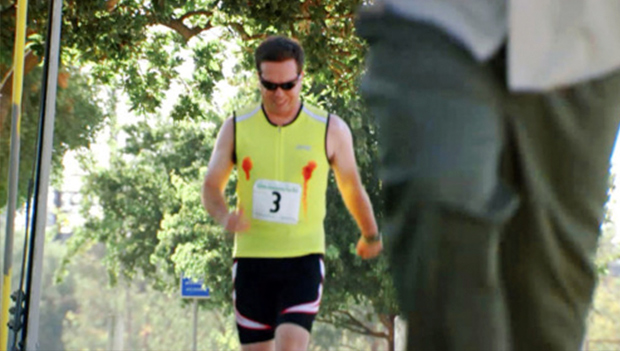 Picture, if you will, a damp autumn morning. Raindrops strike in a rhythmic pitter-patter. You hit the road, earbuds in place, unaware of the danger that lies ahead. As you increase your speed, you begin to feel it, a strange rubbing sensation.

It hurts, but you ignore it. You shuffle songs. "Enter Sandman" plays (how appropriate). You crank the volume and continue into the dark unknown.

The longer the run, the more this force begins to stalk its victims. For some, it presents as a slight discomfort under the shirt, around the nipples. Others feel it solely in their undercarriage. The truly cursed will feel it in both regions.

Chafing is a sensitive topic, taboo because it lurks in our most private areas. It's a nuisance that, out of embarrassment, we're left to deal with alone and in silence.

But the silence ends now.

Men are more likely to experience the dreaded nipple chafe. And though a snug sports bra typically minimizes any friction, women are not always immune.

When you leave the house for a marathon training run, your shirt is likely dry and light. While you're out on the road, you sweat, causing the shirt to become wet and heavy. A heavy shirt rubs your nipples.

A quick three-miler? Probably minimal damage. But on a much longer run, one with six miles or more, your post-run nipples may look like a scene out of a Tarantino movie. Adding precipitation of any kind will only exacerbate the issue. If you have ever been at the finish line of long distance race, you may have seen that unfortunate soul who attempted to run without proper protection. Red circles on his chest, bloody streaks down the front of the shirt and a grimace to match.

If the conditions are just so, anyone can be afflicted on virtually any area of the body. But the second most common area is the inner-upper thigh, due to the prolonged leg friction. Other areas include the under arms, buttocks, and even feet.

With all the scariness about the various areas of the body that can be afflicted by chafing, the good news is that it can be both minimized and prevented.

In the past, I have used a product called NipGuards, which are essentially circular adhesive bandages that you apply to your nipples prior to a run. This acts as a barrier between you and your shirt, preventing friction and chafing. You can find them online for about $10 for a package of 10 pairs—that makes your CPN (cost per nipple) about 50 cents. This can be a pricey option, especially if you're in the middle of a rigorous training season.

Another great remedy for those on a budget is regular old Band-Aids. After some trial and error, I've found that the wide fabric strips work best laid out in a crisscross pattern across the nipples to ensure full coverage.

For other areas of the body there are creams and roll-on sticks, such as Body Glide, that can prevent chafing in other areas. The classic standard is Vaseline because it helps to create a lubricated layer between the clothing and the body.

This training cycle, don't be rubbed the wrong way. Do what you need to prevent chafing and keep your sensitive areas happy.

READ THIS NEXT: 4 Common Causes of Unexplained Fatigue and How to Troubleshoot Them