7 Retro Running Styles That Are Making a Comeback 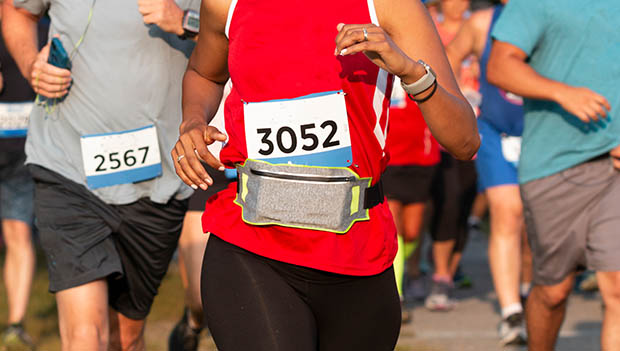 If you've been a runner for a while now, you've undoubtedly witnessed some wild running trends and styles over the years.

But while things fall in and out of fashion, truly impactful styles never disappear entirely and seem to make a return to popularity long after their heyday. We've noticed a few such styles in the running scene so far in 2021.

From fanny packs to performance apparel made from wool, let's take a trip down memory lane as we cover a few current retro-inspired styles that are popular with runners today. And yes, we totally wish we never got rid of that old neon track suit from the '80s.

Sure, you could scour the internet for hours and bid on authentically faded and not-so-new running shoes, but why compromise when you can have the best of vintage style paired with more modern technology? Many shoe companies have recently been moving forward by looking back and are recreating popular models from their archives. These shoes include everything from waffle soles all the way to period-correct vintage logos and colors.

In a world where even the most basic running or fitness watch has an incredible amount of data—including heart rate monitoring, GPS tracking, weather alerts, etc.—many runners are getting back to basics by truly disconnecting from not just tracking but screens entirely. This has caused a rise in the popularity of wearing mechanical watches while running.

It's a style of watchmaking that's been around for hundreds of years, where tiny gears and springs work together to keep time and move the hands around the watch. They're surprisingly accurate, and some even have a chronograph function or a rotating outer ring called a bezel that can be used to help time your splits.

Remember those brightly colored track suits, windbreakers and gilets that were popular back in the '80s? Well, they're back—and in a big way. Not only are runners using these throwbacks for cooler runs or a way to keep warm before or after a track session, but it's even crossed over into mainstream fashion (just ask John Mayer).

There's a reason why wool has been used for hundreds of years—it's lightweight, breathable, natural and still retains its insulative properties even when wet (or sweaty). Lately many brands are incorporating wool running gear into their collections, not only because of the benefits, but because it's also eco-friendly. Wool is biodegradable and renewable, and that's an attractive alternative for many runners who prefer not to purchase gear made with synthetic materials.

While ankle socks are still commonly used by elite track athletes, it's almost impossible to find the casual runner out on the road who isn't wearing longer, calf-high athletic socks. No, they aren't cotton or have stripes at the top like the gym socks of yesteryear, but it's certainly acceptable to wear longer socks now more than ever. And as mentioned above, these tall socks can even be found in performance wool!

Fanny packs—the previously cringeworthy, waist-based storage systems—are once again popular in the running community. They've been rebranded as a slightly cooler "running belt" or "waist pack," and can be seen on the hips of both weekend warriors hitting the trails and Olympic-caliber athletes out on easy training runs. They're great because they're hands free and provide plenty of storage for mid-run fuel (and of course, your phone and keys, too).

While you can still find loud, heavily branded running gear in the streetwear scene, there's been a big rise in design minimalism when it comes to running tops and bottoms as of late. These singlets and shorts harken back to a time where different solid colors were used by track clubs to differentiate themselves, sometimes with a stripe or two to offset the monochromatic theme. Now these simple, timeless designs are popping up in smaller, boutique brands—with some of the biggest companies in the running scene following suit.