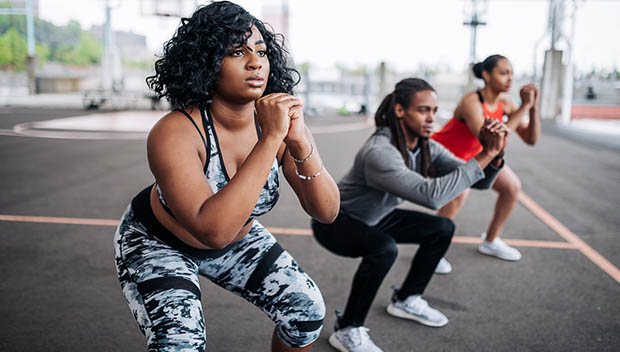 Never before have there been so many performance-based tools available to long distance runners. However, staying healthy and being able to embrace all today's tools for running success still remains elusive for many. Distance running has some of the highest injury rates in endurance athletics, and structural weaknesses rear their ugly heads often amidst the repetitive motion of endurance running. Utilize the following four simple, strength-based stabilization exercises to strengthen commonly weak areas for runners.

Each runner has some aspects of their form that are unique to their structure; however, pelvic stability is the universal foundation to which we all should be attentive. Many running-related injuries are directly associated with poor pelvic stability, including most hamstring strains, lower leg injuries and even IT band syndrome and back pain. With our ZAP-Reebok professional athletes, most of the work we do outside of running is centered on pelvic stabilization. Of course, proper execution is critical to the efficacy of any strength exercise, so pay close attention to form when performing these exercises.

The first step in proper stabilization of your hips is engaging your transverse abdominus, the deep abdominal muscle that stabilizes your spine. Activating this muscle will keep your hips level rather than in "forward rotation," which is important for gluteal muscle function. Aside from the slight natural curvature of the lower back, this will also keep your back relatively flat and inactive, ensuring the spine is properly stabilized. Here are four effective exercises you can do three to five times a week to strengthen your hips and become a more stable and efficient runner. Keep in mind, quality is more important than quantity.

Step-Ups
Two sets of six on each leg; progress to two sets of 12

Find a box or a stair that puts your thigh roughly parallel to the ground with one foot on it. To perform the exercise, place one foot completely on top of the step and then raise fully onto the box using only that leg. As you step up, be sure to use the step-up leg to perform the work rather than pushing off with the foot on the ground, and focus on stabilizing the knee through the exercise. Finish the exercise standing on one foot with the other foot in the air in a running posture and your hips tucked underneath you in a level position.

Clam Shells
Two sets of 10 on each leg; progress to two sets of 30

Start by lying on your side with your legs bent (hips straight and knees at 90-degree angles) and stacked on top of each other. Keep your ankles together while raising your top knee up as you squeeze your top glute muscle, the gluteus medius. The gluteus medius is one of the primary hip stabilization muscles; it prevents the hip from rotating inwards or dipping during impact—one of the most common hip stabilization issues among runners. Make sure your hips remain stable through the motion, and avoid rotating your top hip backwards as you lift your knee, even if it limits the motion.

This exercise activates both your glutes and your hamstrings. Lie flat on your back with your knees bent and feet flat on the floor. Grab one knee with your hands and hug it toward your chest so only one foot remains on the ground. This exercise is often performed with two legs, but hugging one knee at a time toward your chest better isolates the glute by preventing the lower back from becoming overly activated. Engage the glute of the leg on the ground, and push through the heel to lift your hips into the air. Hold the position for one to two seconds before lowering the hips back to the ground.

Stand with your feet shoulder-width apart and initiate the squat motion with the hips by sitting back as if you were lowering into a chair with your hips. Keep your head up and the plane of your back level and flat—if you have to round your shoulders forward or deepen the curve in your lower back to gain the range of motion, then you don't have the proper range of motion to squat any deeper. As you are sitting back, focus on keeping your weight on your heels and make sure your knees aren't coming out over your toes. If you feel like you're going to fall backward, you are doing the exercise correctly, but you are simply limited by the range of motion in your hips and hamstrings, something this exercise will help improve.

As we all begin a new year of training and racing goals, kick off 2019 by giving yourself the best chance for success and health. By adding these simple exercises one to two times weekly (for four to six weeks followed by two to three times a week after the opening month-plus), you'll find yourself more prepared to handle the rigors of a well-thought-out training program.

READ THIS NEXT: 5 Best Physical Therapy Exercises for Runners