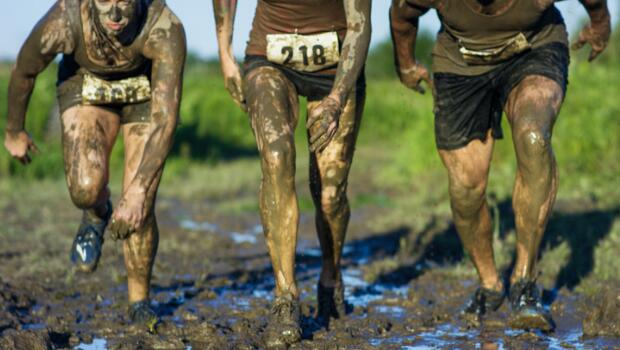 What makes an overweight, out-of-shape person spend upwards of $60 to endure 3.5 to 10.1 miles of physical activity they have been avoiding for years? Mud! And not just mud, but a mud run event, where the appropriate mindset requires participants to dress as if it were Halloween to tackle a military-inspired obstacle course. That, and the irrational goal of putting mud, sweat and tears between yourself and a free beer.

Who in their right mind would pay for this? As it turns out, hundreds of thousands of people, all dressed like they're going to Burning Man, pay a premium to do just that every year.

So, what is the allure of a mud run? A mud run is a mix of whimsical fun and physical exertion; it's the perfect event for a person who is ready to make a change but needs a cloak to do it under. It's also the perfect reminder for a lot of people that they're not in as good of shape as they think they are—and that they're not getting any younger either. How would I know this? Because I'm that person.

My wife and I signed up for the Warrior Dash last year after a few inspired but ultimately failed attempts at running. I think we had an unspoken agreement between each other that we had to do something before all of these years of being busy parents and sitting in office chairs caught up with us. It's pathetic what an office chair will do to your health. We needed something that was extreme, and what better way to throw ourselves into that fire pit than to willingly sign up for an event that ends by literally jumping over a line of burning logs and ankle-singeing flames? We didn't train for the event beyond a few P90X workouts over a couple of weeks, and we weren't exactly ready for the altitude although we've lived in Colorado for decades.

So when race day came, we made our way to Copper Mountain, lined up with the rest of team "not in shape," and ran for the hills. The starting line jockey had the crowd bouncing up and down like a Limp Bizkit concert as the horn sounded. It was at this moment that one of a few things became very clear:

Tip 1: When at an event with more than 1,000 people, no one really "takes off" from the starting line like you see in movies. Everyone just kind of tiptoes forward until they find enough space to take a full step. It's really anticlimactic, and a bit of a buzzkill.

Tip 2: Once the race starts, any nerves you had about the event melt away in the first quarter mile.

The reason your nerves regain their composure after a quarter mile is because you realize that the first obstacle is almost a half-mile from the start line. Nobody mentioned that part, and by the time we finished the initial run, we were looking up a large hill with a tire obstacle staring right back at us. This was immediately followed by a few other overcrowded obstacles and one last decline before we hit "the pit." The reason we were all here was then right in front of me: When I got to it, I jumped in with all I had, landing feet-first in two feet of filthy glory. It's awesome and it was absolutely worth the effort to get there. At that point, a couple more things became very clear:

Tip 3: Don't jump feet-first into the mud pit. As it turns out, the top is a manageable liquid, but the bottom is a bit more like the pile of industrial glue that Wile E. Coyote would find himself in after almost catching the Road Runner. I was ankle-deep in mud so thick that the only way I was getting my foot back was to loose my shoe. I spent the next 60 seconds chest-deep, fumbling in the muck, searching for a shoe that would never be the same again. I did manage to dig it out finally and slosh through the remainder of the pit with one bare foot, but found I was now missing my sock and couldn't even fit my foot back in the shoe because it was so full of mud.

RJ Dollen creates products he loves and writes about his adventures. He created www.mudrunshirt.com after he finished the Warrior Dash experience. He can't wait to get back in the mud pit again.