10 of the Quirkiest Habits All Runners Have 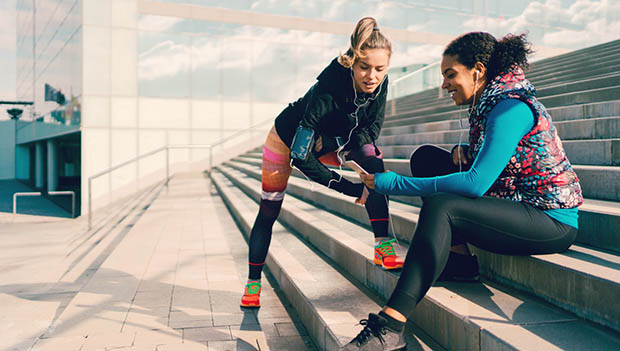 Running doesn't discriminate. It doesn't matter if you're someone who's training for your first 5K or an experienced runner with several marathons under your belt, a mile is still a mile. String enough of them together, and you'll find yourself at the finish line dishing out high fives to total strangers and taking selfies with your hard-earned bling.

Maybe it's from the hours of suffering or the post-run runner's high, but it seems most individuals in the running community exhibit what we affectionally like to call "quirky" habits. You know, the wear-compression-socks-with-shorts kind of habits that we embrace wholeheartedly. From snot rockets to short shorts, here are 10 of our favorite quirky habits all runners have.

It doesn't matter if it's bright yellow with pink accents, runners have no shame when it comes to running apparel. It seems the brighter the better, and while it's technically safer when running out on the road, we all know we think we're cooler when we can be seen from a mile away.

They're technically called "hydration belts," but who are we kidding? Fanny packs are back in a big way in the running scene and have been embraced through the ranks up to the top professional ultramarathoners. It makes sense—they make it much easier to stay on top of nutrition and hydration while training and racing.

Nobody wants to be caught five miles away on a training run when "duty" calls. This can be somewhat of an obsession with runners—we all have our go-to regimen in the morning to take care of business before we lace up and head out the door. Coffee and a banana, anyone?

There's no better feeling in the world than a perfectly executed snot rocket. Say what you will about running apparel, but snot dripping down your face on a cold morning run is never a good look. If you're running with a group or at a race, pull off to the side, and let it rip!

Gels = Nectar of the Gods

A well-timed gel can be the difference between a springy, enjoyable run or a straight-up slogfest. Remember the fanny pack resurgence? Runners always have at least a couple gels stashed inside, as well as in their purse, glove compartment and desk at work. Sure, they might have a terrible consistency, but they do get the job done.

Recovery in the Streets

When you run a few times a week, recovery becomes of the utmost importance. Usually this means foam rolling, ice and compression at home, but runners often head outside to mow the lawn or cruise the mall in their compression socks and shorts—it's something you can't unsee. Trust us.

Let's face it, sometimes runners smell. This is to be expected if you run more than a mile, but it becomes a bit of a problem when you head to your local café and stop for a post-workout croissant and coffee. It doesn't seem to bother fellow runners, though—you can often spot running groups in the wild occupying the same table.

Running is more than just a way to stay in shape, it's an outlet for stress, a way to be social and a way to disconnect for a few minutes and enjoy being outside. No matter if we're sick or injured, avid runners have a tough time taking a break. While we don't advise this, we get it.

Showin' off Some Leg

Runners have no shame when it comes to wearing the shortest shorts possible. Oh, these shorts are only offered in a three-inch inseam? We'll take a few! There are actual benefits besides just showing off your quads—these short shorts promote air flow, reduce drag and decrease chafing. #science

Run to Eat, Eat to Run

Many of us use running as a way to lose weight, but many of us also use running as a great excuse to indulge a bit. No shame here. If you've knocked out your morning run, of course you deserve bottomless mimosas and a chocolate donut or three.

READ THIS NEXT: Are You Committing These Running Faux Pas?