How to Maximize Your VO2max Training 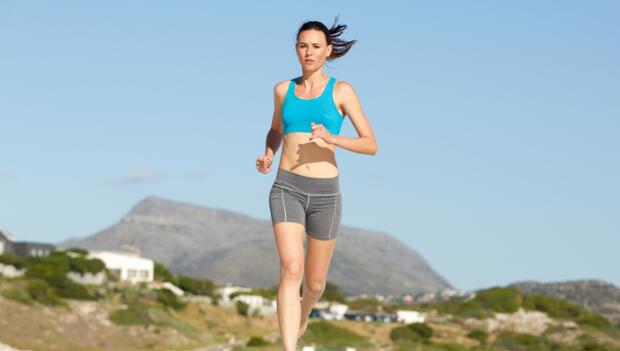 Whatever you choose to call it, running at this intensity level is rather painful. If you do it right, though, it is extremely beneficial. In fact, minute for minute, VO2max training boosts running fitness more than any other type of run training.

Before I give you some tips on how to do VO2max training, let me first explain the physiological rationale behind it.

VO2max is a measure of the maximum rate at which an athlete's body is able to consume oxygen when performing a specific activity, adjusted for body weight.

In running, it is usually determined through a procedure known as an incremental exercise test, in which the athlete breathes into a tube that collects and measures exhaled gases while running on a treadmill whose belt speed and/or gradient is increased incrementally until the athlete reaches exhaustion. The maximum rate of oxygen consumption recorded in this test is the runner's current VO2max.

A high VO2max is important because it is closely correlated with distance-running performance. Research has shown that VO2max accounts for roughly 70 percent of the variation in race performances among individual runners.  Thus, if you are able to run a 5K one minute faster than I can, it is likely that your VO2max is higher than mine by an amount that is sufficient to account for 42 seconds of that minute.

There are two major factors that contribute to a high VO2max. One is a strong oxygen transport system, which includes a powerful heart, hemoglobin-packed blood, high blood volume, high capillary density in the muscles, and high mitochondrial density within the muscle cells.

The other is speed, or the capacity to contract a large number of muscle fibers simultaneously, as the more muscle tissue is active at any given moment, the more oxygen the muscles demand.

Both of these physiological factors are determined largely by genetic makeup but are also affected by training. And it so happens that the type of training that appears to be most effective in increasing VO2max is training at an intensity level that elicits VO2max--or, in other words, at an intensity level that has you breathing as hard as you can.

There is actually no single intensity that elicits VO2max; instead there is a range of intensities that will do the job.  This is because oxygen consumption tends to climb at any given intensity as it is sustained. Hence there is more than one way to hit 100 percent VO2max in training.

The quickest way to elicit VO2max is to run for about six minutes at the fastest pace you can sustain for that duration. So you could do a VO2max workout that consisted of a 10-minute warm-up, a six-minute time trial, and a 10-minute cool-down.

But this is not the best way to go about VO2max training, because you're exhausted after that six-minute effort. It is better to do several shorter efforts at the same or a slightly higher intensity separated by recovery periods, as this enables the athlete to spend more total time at 100-percent VO2max before reaching exhaustion. Another option is to dial the intensity back just a bit and perform several longer intervals.

A good way to introduce VO2max training into your program is with 30/30 and 60/60 intervals. Created by French exercise physiologist Veronique Billat, these workouts are effective fitness builders that are well tolerated by runners at a modest fitness level.

Start with 30/30 intervals. After warming up with at least 10 minutes of easy jogging, run 30 seconds hard, at the fastest pace you could hold for about six minutes in a race. Then slow to an easy jog for 30 seconds. Continue alternating fast and slow 30-second segments until you have completed at least 12 and as many as 20 of each.

Increase the number of 30/30 intervals you complete each time you do this workout, and then switch to 60/60 intervals. Start with at least six of these and build up to as many as 10.

Shorter hill intervals of 20 to 90 seconds are great for developing power, strength and speed. Slightly longer intervals of two to three minutes are great for VO2max development. To do a hill intervals workout, warm up with at least 10 minutes of easy jogging. Then run hard uphill for two to three minutes (choose your duration before you start), jog back down to your starting point and repeat.

Lactate intervals are the toughest kind of VO2max training. Make sure you build up a fairly high level of fitness with 30/30, 60/60 and hill intervals before you move on to lactate intervals.

Run shorter intervals (800m) in your first lactate intervals workout of a given training cycle and then move upward. Do a total of about 5000m of fast running in these workouts (6-7 x 800m, 5 x 1000m, 4 x 1200m). Again, try to run the fastest pace that you can sustain through the last interval without slowing down.

It cannot be denied: VO2max training is hard. That's why most runners do very little of it. But you're not like most runners, are you? Take advantage of your superior mental toughness and make a commitment to VO2max training. You will find the rewards to be well worth a little heavy breathing.