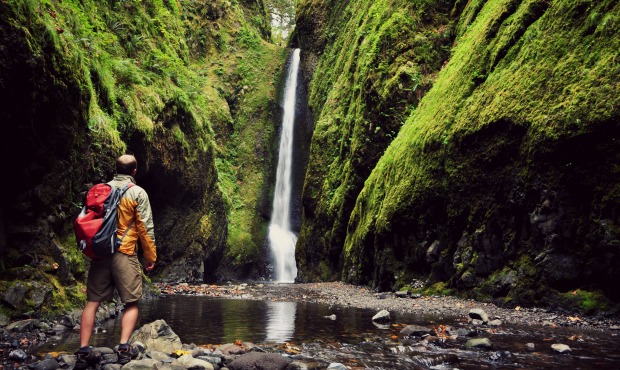 While the City of Roses is home to excellent year-round hiking opportunities, summer is when Portland, Oregon truly shines. Come July, the reliably gray skies take a break, and Portlanders emerge from their abodes in full force, desperate to soak up as much vitamin D as possible during this precious sunny time.

However, the sunny skies also bring higher temperatures, which can occasionally get excessive—even for hearty Pacific Northwesterners.

There’s no need, though, to hide inside huddled near an air conditioner. These great day hikes near Portland will allow you to temporarily escape a bit of that summer heat while still getting your gear nice and dirty (and earning a tasty microbrew afterward, too).

Multnomah is Oregon’s tallest waterfall—and also one of its most visited. To beat the horde of summer visitors, start the trek early or take on the trail when crowds are lower during the week. Even if confronted with teeming throngs at the base of Multnomah, don’t get discouraged; the Wahkeena Falls Trail will quickly take you to an area most shutterbugs and tourists never see—and nets you an additional five waterfalls.

This 5.5-mile trek begins on paved paths, but once you leave the crowds behind, you’ll be on rugged single track surrounded by dense, thick Oregon forest, overhanging rock and plenty of ice-cold running water to cool you down.

OK, six waterfalls not good enough for you? How about 10?

About an hour and a half south of Stumptown, Oregon lies Silver Falls State Park, the largest state park in Oregon. This gorgeous landscape is not short on scenery (the Park Service considered making it a National Park in the 1920s) nor is it short on cascades. The aptly named Trail of Ten Falls winds 8.7 miles over, around, behind and even through 10 roaring waterfalls.

When you’re done, you can relax in the park’s beautiful lodge—a relic from the era of the Civilian Conservation Corps—and maybe pick up an ice cream to cap off your cool-down.

If hiking near water isn’t enough to keep your body temperature regulated, perhaps it’s best to hike in the water itself.

You can tack this short trek on to the nearby Wahkeena Loop to increase its length, and you won’t have to worry about getting lost since the trail follows a river the whole way. While flooding isn’t usually a problem in the summer, be sure to check the water levels before you go.

For those wary of their physical capabilities, all this hike takes is a little climb over a logjam and the ability to wade through some chilly, waist-high water. It’s just 0.6 miles round-trip to a gorgeous, moss-lined waterfall that you’ve probably already drooled over on Instagram.

High temperatures don’t mean you have to sacrifice elevation gain on your hike. Saddle Mountain sits west of Portland in the Coast Range, where higher elevations and reliable coastal influence mean the temperature is often 10 degrees cooler than down on Burnside Street.

The steep, 5.2-mile round-trip trek to the summit gains about 1,600 feet but rewards hikers with summertime wildflowers and sweeping views of the Pacific Ocean and towering Mount Hood. Unlike the other treks listed, you’ll be in the sun on this one, so start early and pack plenty of water and sunscreen.

Casey Schreiner is the founder and editor of the most read hiking blog in California, ModernHiker.com.

Book your next hiking trip