Running With Sickness: Can You Sweat it Out? 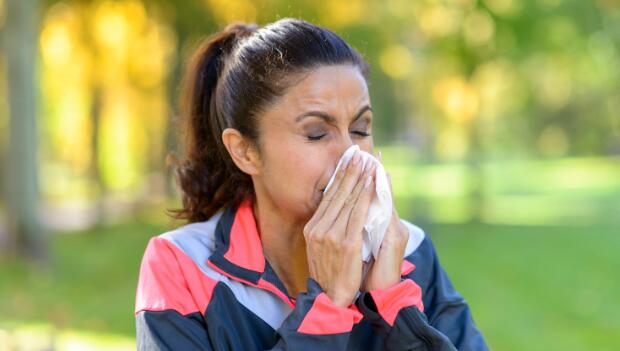 Ask any runner and you'll hear the same refrain: "When I feel a little cold coming on, I lace up and sweat it out." They're quite confident that running can ward off just about any illness. During this season of sniffles, coughs and the dreaded H1N1 flu, such a thought is great consolation. But can you really fend off a cold just by running? For the truth on this and other commonly held beliefs, we turned to Dr. David Nieman, Ph.D., a professor and director of the Human Performance Lab at Appalachian State University and the North Carolina Research Campus. He's spent more than 20 years studying how running and other forms of exercise affect the immune system. And with 58 marathons and ultra marathons under his belt, he understands the challenges endurance athletes face.

You can't "sweat out" a cold. Plain and simple, no matter how restorative your run may feel, no research proves it helps combat that cold. Instead, a temporary serotonin boost might account for your overall sense of well-being. Though running won't cure what ails you, running with a minor cold isn't likely to make it worse. However, if you have something more serious than a cold—and let's be honest, sometimes it's hard to know—you should really bench yourself. In a recent study of horses infected with the influenza virus, exertion caused their symptoms to be prolonged and more severe. Nieman cautions, "All the best animal studies show that sickness is made worse by exertion."

Regular runs can bolster your immune system. Okay, so we runners already know we are a healthier lot, but this news may be the best reason yet to keep logging those miles. Regular running (approximately one hour or less on most days of the week) helps you avoid those nasty upper respiratory tract infections caused by the more than 200 viruses that cause the common cold.

"In a recent study (published in the International Journal of Sports Medicine), we found that 45 minutes of exercise at a brisk pace for five days a week caused sickness rates to drop in half," Nieman says. "There's no supplement or drug that knocks out sickness rates like this." He likens the effect to how different your house would look if you brought in someone to clean for only 45 minutes each weekday. It's the simple maintenance that can produce a profound effect over the long run—no pun intended.

The study "showed that during exercise and three hours after there was enhanced circulation of important immune cells," Nieman adds. He explains that for your immune system to fight viruses, your immune cells need to "get out and touch" the virus in order to respond. In other words, anything that gets your immune cells out of the lymphoid tissue and circulating is a good thing. "My analogy is to think of it like having the police in a moderate-sized town circulating around versus sitting in the coffee shop," Nieman says.