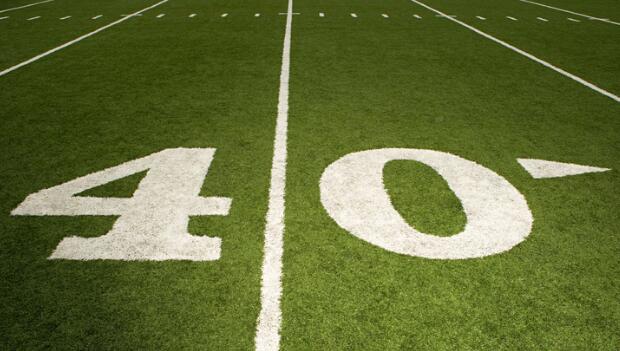 The 40-yard dash is the ultimate measurement of speed in football. Prospective NFL players are given bigger contracts or passed over entirely based on how they run the 40. College prospects are given an extra look if their 40 time warrants it.

Want to improve your 40-yard dash time? Patrick Beith of Athletes' Acceleration offers seven tips to a faster 40--and they're all before you even take off.

The start of your 40 is extremely important since it sets up your entire run. You want to put yourself in the best position possible to be able to explode off of the line.

Technically, the distance between the front foot (power leg) and the starting line should be approximately 55 to 60 percent of your leg length. The distance between feet should be shin length, which is about 42 to 45 percent of total leg length. A simpler and equally effective spacing is to start by placing front foot (power leg) two foot-lengths from the starting line and the rear foot (quick leg) another foot length between the front and rear feet. Spacing can be adjusted from there based on comfort, existing strength levels, etc.

Shoulder Position at the Start

The position of the shoulders while starting is a subject for debate. Some coaches instruct their athletes to bring their shoulders out slightly past their hands, thus bringing the center of mass closer to the starting line. First off, at some football combines, this movement is illegal so check with an official at your combine if you prefer to use this technique.

I have found that leaning forward at the line often makes athletes fall forward at the start. So, their first step is catching and trying to control their body instead of exploding out. They are actually trying to keep their feet underneath them to avoid falling forward and not creating horizontal velocity during the drive phase.

Evidence suggests that angles in this range allow for the greatest stretch reflex in the hamstrings, as well as the greatest amount of velocity when exiting the starting line. It is important that you know your limitations. Even advanced male athletes, at the high school level, usually do not have the strength and power capabilities to successfully use lower knee angles when in the set position. A tell tale sign of poor acceleration mechanics and/or body angles is seen when an athlete becomes completely upright within the first few steps of a race. Rapidly decreasing shin angles are the most obvious evidence of limited strength and power output.