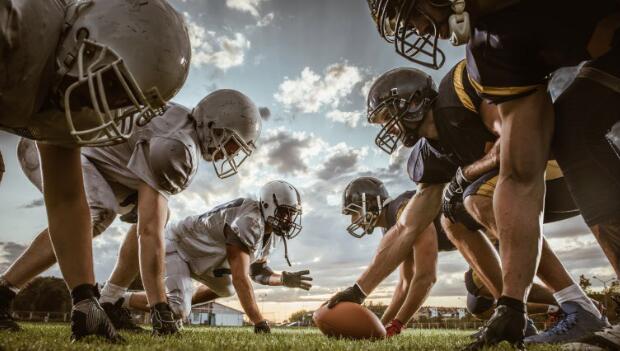 In my mind, coaching the offensive line correctly is critical at the youth level. You'll notice that there are many different kinds of blocks and drills: angle block, hook block, drive block, and so forth. A word of caution: it's not how many different blocks your team uses, it's how well they execute each step of each particular block.

If your third grader hasn't mastered the drive block, you don't want to move on to cross blocks or down blocks. Be patient; take it one step at a time. In my DVD series on how to achieve success in youth football, the offensive line segment is the longest and rightfully so: the success of a team depends on the play of the line. You can find more information on tips, strategies and coaching techniques by visiting my web site at coacht.tv.

Here are some initial thoughts on teaching basic skills to your offensive linemen.

Proper stance is the foundation from which a good offensive lineman must operate. It's vital that the weight of the lineman is evenly distributed so that he remains balanced. Too much weight forward makes it hard to pass block. Too much weight behind will not get a fast power step/quick step charge off the line.

One final point: most centers don't realize that they can line up offsides. Their helmet cannot encroach past the ball. Get them used to snapping the ball with their snapping hand outstretched in front of them.

Firing Off the Line

The second step is the quick step. This step occurs following the power step and will happen when the defense reacts to the snap of the ball.

The third part is the attack; the lineman's hand contact to the chest of the defender. These three parts to firing off the ball must be repeated over and over again. A rhythm should develop so that these three steps become second nature. To coach a winning youth football player, repetition is important, beginning with the basics.

To perform a successful play, whether it is a pass or run, lineman will be required to make and sustain a block, but of course not indefinitely. In many cases, making a good block for six seconds can create a long offensive gain. Essentials to sustaining a block begin with the tips outlined above--proper stance, firing off the ball, getting proper positioning on the opponent, and driving the defender in the direction of your choice. Again, repetition is a vital component of teaching proper blocking techniques.

Find a football league or activity near you.Thad Tumbleson, or "Coach T" as he is better known, runs a successful summer youth football camp in which the kids learn not only how to become better football players, but better people. Coach T has created a popular 10-set DVD series, "Coach T Tackles Football". The DVDs explore numerous drills, strategies, up-to-date techniques and approaches, safety tips, sports medicine and provides in-depth positional analysis. Visit his web site at www.coacht.tv for more information about his camps and DVD Series.