What You Need to Know About Thirst 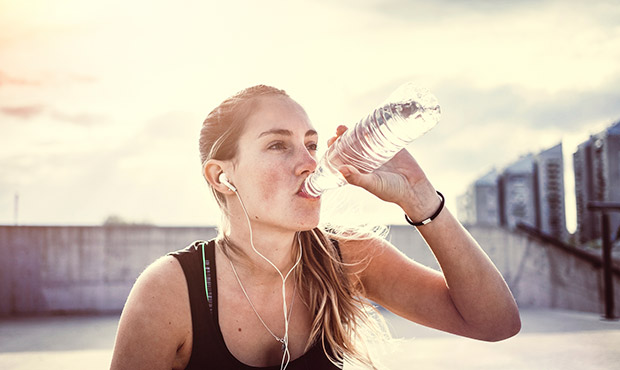 You probably know that it's unwise to stay thirsty, especially during a hard workout. But Dr. Allen Lim, founder of Skratch Labs, breaks down how your feelings of thirst are giving you important cues on how to hydrate for performance and well-being.

Our bodies are made up of 60 to 75 percent water, and when we sweat, we begin to lose that water quickly. This fact alone tells us how important it is to hydrate when we exercise so we can replace those lost fluids. But remember, sweat isn't just water. It's also made up of electrolytes, especially salt or sodium chloride, which makes up about 90 percent of the electrolytes we lose. Of these two electrolytes, sodium and chloride, it's sodium that plays the most important role in our body's function.

If you're just drinking water and failing to replace the sodium lost in sweat, you're not replacing components your body desperately needs to perform at your peak and to remain healthy.

That's where hydration drinks come into play since they will help you maintain the sodium and fluid balance in your body. But what should your hydration strategy be?

Listening to your body’s natural mechanisms can help you answer that question.

Why You Feel Thirsty

You feel thirsty for a number of reasons, but one key trigger is the molecular concentration of your blood—specifically, how much sodium is in it.

As we sweat, we lose more water than salt, and as the sodium concentration in our blood increases, we begin to feel thirsty. Generally speaking, we stop feeling thirsty when we consume enough water to bring the concentration level back down.

But if we continue to drink water even after we satisfy our thirst, we run the risk of diluting our blood's sodium concentration, resulting in a situation called hyponatremia, which leads to a number of negative performance and health consequences, like nausea, vomiting, headaches and even seizures.

How Much You Should Drink

So how do you know how much to drink?

First and foremost, listen to your thirst to regulate how much you drink. Understand, however, that depending on the duration and intensity of your effort—and how hot it is outside—drinking to thirst won't likely be enough since you also need to worry about controlling sodium balance, not just water balance. It's OK to lose some water, and losing some water is better than drinking so much that your sodium concentration becomes diluted.

For shorter and lower intensity efforts in moderate temperatures, drinking plain water is probably fine if you listen to thirst, since losing a little bit of body water during shorter durations and cooler temperatures isn't likely to be a problem.

For longer and harder intensity efforts in high temperatures, where water and sodium loss can be very high, drinking plain water to thirst isn't optimal since losing beyond three to five percent of your body weight in water can result in significant drops in performance and potential heat-related illnesses.