8 Push-Up Variations to Add to Your Routine 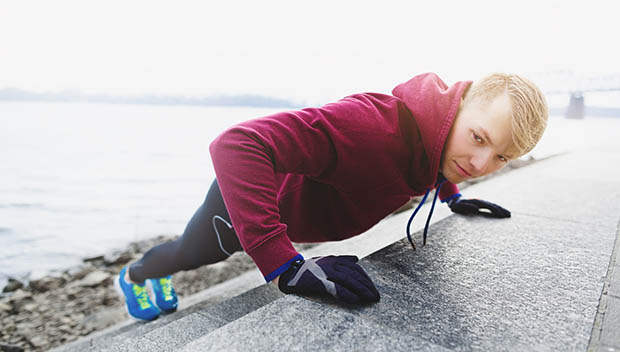 The push-up is one of the most effective strength training exercises, but it gets a bit monotonous at times.

You go up, you go down and you repeat the sequence. Even though it produces results, it's not all that flashy.

Instead of falling victim to the monotony, try adding a few variations to your routine. You'll experience the same great benefits, along with a few more. Plus, if you’re struggling to get your first push-up, scaled exercises can help build the strength you need to get there.

Note: Before you attempt the intermediate, advanced and extreme variations, be sure to master the traditional push-up.

Traditional push-ups aren't an option yet for some. If you're in this group, it's recommended to build strength with incline push-ups.

Incline push-ups can be done with a wall, box, bench or bar. Begin in a traditional push-up position. Your hands should be slightly wider than shoulder-width apart. Your body should be at about a 45-degree angle, though this angle will vary depending on what you're using.

Lower your body down, bringing your chest as close to the bench (or whatever you're using) as possible. Push back up to return to the starting position.

Keep your abs engaged and your body straight throughout the movement. As you become stronger, slowly lower the angle of your body in relation to the floor until you're able to perform a traditional push-up.

Perform a push-up on your knees rather than feet. This helps take some of the load off your arms so you can press yourself back up more easily. Be sure to keep your back flat and touch your chest to the ground.

Benefits: Allows you to perform the push up motion without as much body weight resting on the hands and arms.

Begin in the traditional push-up position, but instead of placing your hands on the ground, place them on a firm medicine ball.

As you perform the push-up, focus on lowering slowly and exploding up once your chest touches the ball. Continue for desired reps.

To set up, loop a resistance band around one thumb. Wrap the band behind your back and underneath your armpits, and then around the other thumb.

Perform a traditional push-up, but begin from the bottom position.

As you extend your arms and push into the top position, the band will increase the resistance. This accommodating resistance is a great way to build strength.

Begin in a traditional push-up position. As you lower your body, bend one leg and bring your knee up as close as possible to your wrist on the same side. Try to keep the foot of the bending leg off the ground throughout the movement.

As you return to the starting position, bring your leg back so your body is straight. Alternate sides in this knee-drive pattern for the desired number of reps.

Like the previous exercise, this push-up variation will help engage more of your core muscles. Start in a push up position. Each time you lower your chest to the ground, bring one leg up and cross it beneath your body, rotating your hip to the ground and kicking out. Then, extend your arms and press up, rotating and returning your foot to its starting position before switching sides.

Benefits: This is a core burner that will help you work on core stability and oblique strength as well as upper body strength.

Start in a plank position with your hands together. Angle your fingers inward and touch your index fingers and thumbs to form a diamond shape. Lower your chest to your hands, keeping your elbows close to your midline.

Benefits: Strengthens the triceps by eliminating the load on the biceps.

Elevate your feet by placing them on a box, bench, or stack of plates. The higher your feet, the more difficult the movement will be. Make sure to keep your core engaged as you lower your chest to the ground, and don’t let your lower back sag just because you’re under greater strain.

Benefits: Requires greater core strength and helps build arm and chest strength by increasing the load on your upper body.

Cross one ankle over the other so that only one foot is on the ground. Perform push-ups as you normally would.

Benefits: Having only one foot on the ground requires greater stability and more core activation.

Note: This exercise can be done with a TRX strap, stability ball or sliders.

Start in a push-up position with your feet on a pair of sliders or one of the other equipment options.

Begin performing a push-up. On the way up, tuck both knees in towards your chest. As you go back down for the next repetition, straighten your legs back out.

If you're struggling to find a synchronized rhythm, try pausing at the top of the movement to bring your knees in and out before you begin the next rep.

Begin by performing a traditional push-up. On the way back up, however, rotate your torso, sweep one leg underneath your body, and extend it out on the opposite side.

Keep your top elbow tight to your ribs at the top of the movement. Next, pull your leg back through and return to the top of the push-up position. Alternate sides and perform desired reps.

Begin on your knees facing a wall. Place your hands apart 6 to 10 inches from the wall, slightly wider than shoulder-width apart.

Next, kick your feet up so your heels rest against the wall. You should now be looking away from the wall, and your body should be in a relatively straight line from your wrists to your feet.

Bending at the elbows, slowly lower your body down until your head barely touches the floor. Reverse the movement and press your body back up until your reach full elbow extension.

Wear a weighted vest or start in a standard push-up position and have someone place a weight plate on your back. Lower your chest down to the ground slowly, then push back up quickly.

Benefits: Increases time under load and the weight of the load. This added strain helps increase strength, control, and speed in the long run.

One Arm Push Up

This one is exactly what it sounds like. Place your feet wider than you would for a normal push up. Keep one hand on the ground and place the other behind your back. Bring your chest to the ground, then push back up on one hand.

Benefits: Isolates arms to double the load on each. Also requires more balance and core stability than a typical push up.

This move requires both a rotational component and a plyometric component, as well as a lot of relative body strength and control.

Begin performing a standard push-up. On the way up, however, push with enough force so you explode off the ground. Additionally, attempt to rotate your body clockwise while you're in the air so you land in a different position from where you started.

Continue the reps until you've rotated in a complete circle. Count how many reps it takes. The ultimate goal is 2 reps, meaning 180-degree turns each push-up.

READ THIS NEXT: 5 Squat Variations Everyone Should Do

What is the easiest push-up variation?

Incline push ups are the easiest push-up variation and best for beginners. The higher the incline, the easier the movement. Start with your hands very elevated and work on slowly lowering down a little each time.

Which muscles do push-ups work?

Push-ups work the triceps, pectoral muscles, and deltoid muscles of the shoulders. They also require core engagement and can strengthen the abdominal muscles and obliques.

Should your chest touch the ground when doing push-ups?

Yes, your chest should touch the ground when doing a push-up. Otherwise, you are not doing a full rep.