What Is a Velodrome? 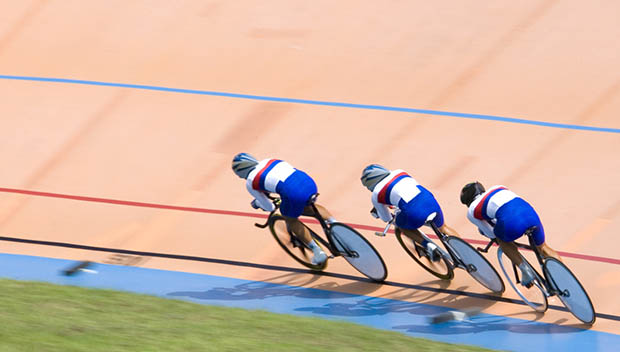 We recently published an article about track cycling basics (if you haven't checked it out, click here) where we covered everything from track cycling events, the bikes and gear needed and the basic skills, but while it's a great high-level overview, we wanted to dive deeper into some important details when it comes to track cycling as a sport.

Most notably, we wanted to investigate what a "velodrome" is.

Sure, those of us who have been around the sport for some time know all about these oval-shaped tracks (or have even ridden on them before), but for people who aren't yet familiar with track cycling, describing a velodrome as such can lead to even more questions.

Below we'll cover what a velodrome is and the science behind those menacing banked ends, as well as describe a brief history of the unique architecture.

Do you have any cycling-related "What is" questions? Leave us a comment below and we may answer them in our next article!

What is a velodrome?

If you've ever watched the summer Olympics and saw cyclists riding in a circle on what looks like a bowling alley lane, that's a velodrome. In its most common form, a velodrome is wooden, features 45-degree embankments on each end and is 250 meters in circumference. Not all velodromes are the same, though—some are made out of synthetic material or concrete (or even asphalt). They can vary in distance circumference (between 150 and 500 meters), the degree of the banked ends can fluctuate and there are both indoor and outdoor options.

Indoor velodromes are especially impressive—designers and architects modify the conditions inside to optimize performance and efficiency. They'll take indoor air temperature into account (warmer is better), try to build at higher elevations with thinner air (less aerodynamic drag) and often surround the track with spectator stands to make the acoustics of the building as loud and encouraging as possible. Energy efficiency is also kept in mind, with many top indoor velodromes utilizing sustainable materials in construction and natural lighting from skylights, and architects plan ahead by using quality materials with low operating and maintenance costs.

So why bank the ends of the track? Why not race on a track and field-style track so other sports can use it, too?

Just like in automobile racing, banked ends results in the ability to carry more speed through the corners. Think about when you corner at high speeds on a bike while descending—you inherently lean to the inside of the turn to maintain momentum and keep yourself from going past the center of gravity on the opposite side. The same holds true for a velodrome: The banked corners make it so the rider can stay perpendicular to the surface to sustain speeds upwards of 50 miles per hour. Without the banks, the rider would fly off the edge of the track, so they allow the rider to maintain a fine balance between downward and outward force.

Cycling as a sport has a truly storied history, and track cycling is a big contributor to where the sport is today. Tour de France champions Bradley Wiggins and Geraint Thomas started their prolific careers at the track, as have countless other top professional cyclists over the years.

The velodrome itself dates back to mid to late 19th century, with the velodrome at Preston Park, Brighton in England the oldest example. Velodromes of yesteryear didn't feature perfect straightaways and finely tuned 180-degree ends—each velodrome had its own unique look and feel. It wasn't uncommon for velodromes to have minimal banking, interesting shapes like squares or asymmetrical layouts or circumferences greater than 500 meters.

The Olympic Games sparked a need for more consistency in velodrome construction, and slowly the size of velodromes shrank from 500 meters in circumference in 1896 to what we now consider the 250-meter standard (around 1990).

As far as construction goes, Schuermann Architects from Münster, Germany, is widely considered the most prolific velodrome builder in the world. It has constructed over 125 outdoor velodromes in the last century—many of which were used in the Olympic Games (Berlin, Rome, Mexico City, Munich, etc.).

In the United States, track cycling isn't as popular as it is overseas. Road and mountain biking dominate the cycling landscape, but despite this there are still almost 30 velodromes spread out across the country—most of which are open to the public and offer classes to teach beginners the skills needed for both the velodrome and the track-specific bikes. A simple Google search for "velodromes near me" will help you find one for yourself, or click here for a list of all the velodromes and cycling tracks worldwide.

READ THIS NEXT: What Is a Gran Fondo Cycling Race?