Race Strategies for Breaking Away 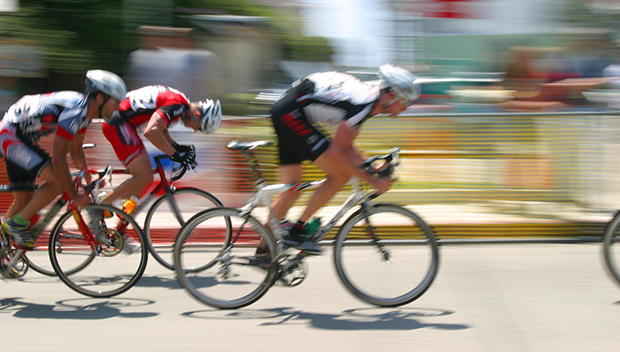 In bicycle racing, there are an infinite number of strategies and approaches to reach the same desired outcome. Some strategies might work well on a course one year but not the next because there happens to be a slight cross wind. Some strategies work when it's dry but not when it's raining. What works great on a flat course with lots of turns could fail miserably on a similar course with less turns.

Since there isn't enough space here to even make a dent in all those infinite eventualities, we'll just deal with a few of the basics.

Above all, don't just sit in a race as cannon fodder and then spend the post-race bull session rationalizing why you didn't do a thing. It's all right-and-perfect strategy to keep your powder dry for that decisive move, but that's different from taking the race passively and just hoping something will happen.

Quick: who doesn't love Jens Voigt? We love him because he's not afraid to take the bull by the horns with his super-aggressive racing style. Similarly, there's nothing more fun than showing up to a race with five or six teammates and just putting the hurt on all day long. By simply riding aggressively, you force the other teams into a defensive position which not only limits their choice of tactics, but plays an important role in the mental balance of the competition.

However, many times I've seen a team get too carried away having fun with their attacks. Suddenly, their opponent pulls a judo-type move—using your aggressive riding against you. To improve your chances of success you'll want to break your squad of five to six racers into three key roles: the Pawn, the Bishop and the Queen. Today, we'll focus on The Pawn.

Life of a Pawn

Of a team of six, you must have three riders at the front at all times as pawns. They take turns attacking and following the obligatory counter-attacks. This must be carefully coordinated so that The Pawn who just chased an attack can recover while the other two Pawns are on top of any moves that might go in the interim. The most important thing to keep in mind is that the tired Pawns should never drop more than two or three riders back in the peloton after an effort because she will shortly be needed back at the front.
You can practice this in training by doing one-minute max-effort intervals off the front of a group ride. When they catch you, even though you are spent, don't let yourself fall more than two or three riders back in the group while you recover.

When you are trying to break away, never attack from the very front. If you do, you'll be accelerating directly into a headwind and everyone will see you shift gears, stand up and then jump. What you want to do is accelerate up the side so that by the time you are seen by the riders in the front, you're already going four to five mph faster than them. Then, if they want to follow, they will have to bridge the gap you've opened.

The first attack rarely works. After each attack gets caught, the next rider (of the three) needs to be ready to either launch another attack or follow the counter attack. The worst mistake you can make is to launch a dozen great attacks and then miss the one that turns out to be the winning breakaway.

Therefore, even if you are tired, you must remain vigilant in case one of your fellow Pawns misses an important move. For instance, if you've just followed three attacks in a row and the rider directly in front of you suddenly stands up and throws it into gear, don't look around for your teammates wondering if someone is going to follow this person. You're in position. He's your man.