How to Crash Your Bike for Minimal Injury and Damage 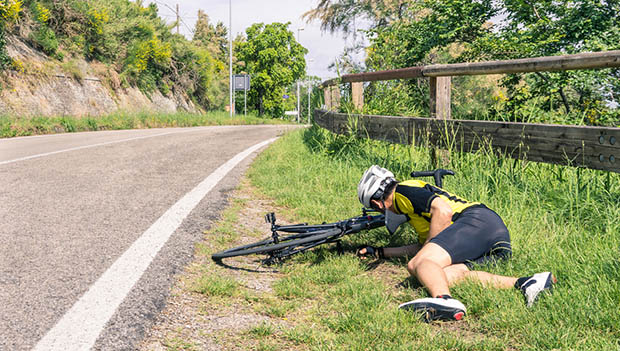 It doesn't matter if you're a three-year-old who just had their training wheels removed or a Cat 2 cyclist who just won their local criterium, everyone crashes. You can try to fight gravity as long as you want, but eventually you'll find yourself in a situation where you can't keep the rubber side down.

Don't let this deter you, though—cycling is a wholesome sport with a lot of health benefits, as well as a social scene that's both friendly and active-minded.

But let's say you find yourself in a sticky situation. You know you're going down, things start to move in slow motion and you're inevitably going to find yourself on the ground—what should you do? What is the best way to crash?

If you're going to crash, you might as well try to limit the damage as much as possible. This isn't foolproof advice, but here are some general tips on how to crash your bike for minimal injury and damage.

Before we even attempt to tell you how to crash as safely as possible, it's important to always remember to never leave the house on your bike without wearing your helmet. Even if you're just riding your cruiser bike to pick up groceries, a helmet can sometimes be the difference between life and death.

For this article, imagine you, the rider, have entered a turn too hot and are losing control on a winding descent. Obviously if you're crashing, something went wrong somewhere, but it's important to try to correct your position as if you weren't about to crash. This is easier said than done (and requires a split-second reaction time), but point your knee into the turn, readjust your center of gravity and straighten your body. Fight the feeling of launching over the wrong side of the bike as much as you can.

By now it's likely you've lost traction (whether you've hit a wet patch or road debris) and despite resetting your position, you are still out of control. It's almost impossible to prevent a fall once you've lost traction around a curve since inertia (both of the turn and the brakes) is pulling you the opposite way, so now it's all about mitigating your losses.

Release your brakes, allow the bike to regain traction and correct the front wheel. This will throw you out of your turn and into a straighter trajectory, but it will also give you a split-second to (hopefully) pick where you're going to crash.

Once you've regained a bit of control, brake as much as possible. As we mentioned, you're exiting the turn in a straight line, so it's only a matter of meters before you'll find yourself on the ground. We're not saying brake so hard as to lock up the wheels and lose traction again, but the more you can safely brake, the better.

Now is the time to look for the best place to crash. You'll have limited options and not much control, but try to shoot for grassy areas or loose dirt. Try to avoid all obstacles, like traffic signs, guard rails or parked cars.

It's going to hurt, but the key here is to lay the bike down as smoothly as possible. You don't want a "thud," but rather a "slide"—this disperses more of the energy and can help prevent more serious injuries. Unclip the inside leg, face the direction you're headed and drop your shoulders. Take your hands off the bars and once sliding on the ground, use your feet to slow your momentum as much as possible to help limit the amount of road rash you sustain.

Remember, these decisions are made in the matter of seconds. No matter your best effort, there will never be an ideal crash (if there was, you wouldn't crash in the first place). Crashing is also instinctual, so after a handful of similar spills, your body will react for the best-possible outcome nearly automatically. But visualizing a spill can help fast-track these instincts. Take some time to imagine yourself in this scenario, and visualize yourself making these decisions in a matter of seconds.

READ THIS NEXT: How to Handle a Bike Accident With a Vehicle