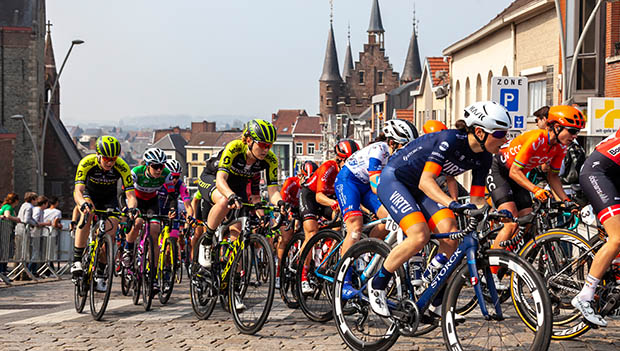 No matter your gender, everyone from all walks of life deserves to experience the joy of riding a bicycle.

For such a simple and straightforward machine, a bike is more than just the sum of its parts—it's a mode of transportation for some, a tool to stay in shape for others and it even provides a livelihood for some of the world's best athletes.

While spandex-clad men have dominated this historic sport for over 150 years, women's professional cycling has been on an absolute tear recently. There's certainly a long way to go, but it's entered the mainstream conversation and has deservedly garnished editorial coverage and high-caliber sponsorships, as well as legions of fans all over the world.

If you're unfamiliar with women's pro cycling, we're here to help. Below we listed a few of our favorite things about women's professional cycling—from dominant stars to high-intensity racing.

What are some of your favorite moments in women's professional cycling? Why do you watch? Let us know in the comments, below!

Unlike men's cycling (although men's cycling is a relatively lean sport compared to the financial backing of other sports, too), professional cyclists in the women's rank don't make very much money from their contracts. Of course, this needs to change and team budgets have been increasing in the past couple years, but generally their contracts aren't lucrative, which means they're usually racing for the passion of the sport, not the money.

Many of these women have side careers or have entered the professional ranks later in life and simply love the competition, the camaraderie and the thrill of racing in the peloton—and it shows when they're on their bike.

We'd love to see the women's race calendar as filled with events as the men's calendar, but since there aren't as many races every year, a good showing at these events is even more important.

You'll see more action right from the start as teams fight to make the breakaways, you'll see more dramatic long-range attacks and generally it feels much less conservative, which makes it fun for audiences at home. Road racing is generally the fan favorite type of racing, but women are dominating the gravel, cyclocross and mountain bike scenes as well and shouldn't be overlooked.

You'll be hard-pressed to find women's professional cycling coverage from major TV networks in the United States—especially now that Universal has announced that NBC Sports will be shutting down by the end of 2021. What you will find, though, is that there's a wide array of coverage for women's professional cycling if you know where to look. We love the coverage by our friends at Global Cycling Network (GCN), and they even stream some of the major races through their GCN+ service (make sure your area is included before subscribing). You can also find some live coverage and replays of major races, including post-race interviews and highlights on FloBikes.

It won't be live, but you'll be able to watch recaps of some races on YouTube on the Eurosport or UCI channels, too. Beyond that, there's lots of grassroots-style insider content from team, sponsor and rider social media accounts, as well as editorial outlets like VeloNews and Cyclingnews.

Like Chris Froome or Julian Alaphilippe in the men's ranks, the women's peloton has some world-class dominant athletes that deserve attention.

None is more iconic than Marianne Vos, a three-time world road race champion, a seven-time cyclocross world champion and an Olympic gold medalist who is a threat for a win at each race she starts. Other notable riders to pay attention to include Annemiek van Vleuten, Anna Van der Breggen and Amanda Spratt—but breakout stars seem to show their mettle at every race.

We've mentioned this in passing already, but it's clear that women's professional cycling is growing year after year. From more races to more resources, the peloton is more competitive than ever before. Fans are demanding more content, and the growing interest paired with the outspokenness of the athletes and teams themselves (as well as advancements in women's-specific gear) have pushed women's cycling into a greater conversation.

By supporting women's cycling as a fan, you're helping secure more long-term sponsorships for teams, you're helping them add more races to their calendar (multi-stage racing, anyone?) and you're helping these world-class athletes gain the equal pay and notoriety they deserve. A great comparative example is in the sport of triathlon, where women and men race on the same course, have access to similar sponsorships, and recently, have equal prize money for strong performances.

READ THIS NEXT: 7 Reasons to Stow Your Road Bike and Pick Up Gravel Riding