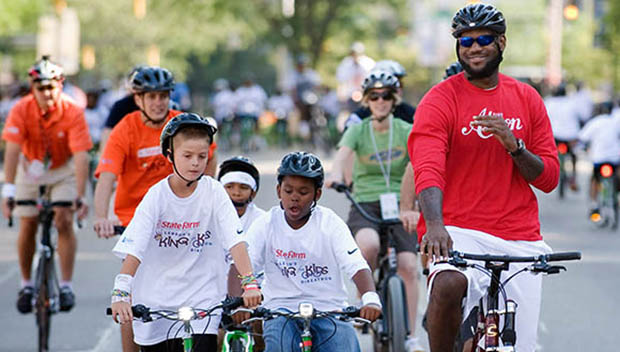 This year, we're having some fun with our Tour de France coverage. Don't worry, you're still getting the usual pre-race breakdown, can't-miss stages guide and riders to watch pieces, but we thought we'd also include some fun lifestyle articles. Call it ACTIVE's very own People Magazine spread.

But that doesn't mean we're discussing who's dating who or which outfit was a disaster on the red—er, yellow—carpet; instead we're mentioning celebrities who live and breathe all things cycling, including the Tour de France.

From big screen stars to sports icons, you might be surprised which celebrities are Tour de France super fans.

Did you know the three-time NBC champ purchased an undisclosed ownership stake in Cannondale back in 2007? Not only that, James has been quoted comparing the demands of the NBA Finals to finishing the Tour de France. He's also been seen riding around on his custom bikes in his community, both on training rides and participating in charity events.

Perhaps the most die-hard celebrity cyclist on this list, the late Robin Williams lived and breathed cycling. A true Tour de France fan, Williams was regularly photographed hanging out around the U.S. Postal Service team bus and was seen riding in the team car with the race director. He rode bikes too (for everything from commuting to triathlons), and many of the bikes in his personal collection were auctioned off to support the Challenged Athletes Foundation after his untimely passing.

One of the most famous actors of our generation, Gyllenhaal does more than just perform on camera: He's a big fitness fanatic, which includes cycling. He's a follower of the Tour de France, and Gyllenhaal (who was slated to play Lance Armstrong in a film) and Armstrong were seen on camera together at the 2006 Tour of France outside the Discovery team bus.

He's a few feet taller than many of the Tour's smallest climbers (which requires a custom 72.4-centimeter bike), but Bill Walton is a true cycling fan. He has been known to share Tour de France video clips on Twitter (last year he shared an image of his signed Peter Sagan jersey), and he was honored at the "Chairman's Ride" at the Tour of California in 2015.

Perhaps no celebrity is closer to the Tour de France than Ben Stiller. The comedian has been an avid follower of the Tour for years, becoming close friends with Lance Armstrong. So close in fact, that Stiller jumped on Armstrong's TT bike minutes before the start, causing the team mechanics to have to complete last-minute fixes before the cycling superstar ultimately rode off and won the race.

We all know Brett Favre as the Hall of Fame quarterback of the Green Bay Packers, but after he wrapped up his NFL career, Favre took up cycling (and triathlon), enlisting some of the sport's biggest names. He leaned on Lance Armstrong early in his cycling career for help on the bike (Lance helped outfit him with a custom Trek) and has even been seen supporting fan-favorite Tour de France stage winner Jens Voigt.

The 43rd president of the United States is a serious cycling fan. He personally called Lance Armstrong to congratulate him on his Tour de France victories and has even taken up mountain biking (and has also ridden with Armstrong) around his ranch in Texas. At 72 years old, this former president is still riding regularly.

Bo Jackson is considered one of the greatest athletes of all time, and after his successful football and baseball career, Jackson immersed himself in the cycling world. He's the organizer for "Bo Bikes Bama," a charity ride in his name, and is on the record with Cycling Tips saying he watches the Tour in his basement and considers Tour de France cyclists "real athletes."

Rivaling Robin Williams as the biggest celebrity cycling fanatic, Patrick Dempsey, "McDreamy" to Grey's Anatomy fans, has been welcomed with open arms by some of the Tour's biggest professional teams (and has ridden with the likes of Peter Sagan and Tom Danielson). Better yet, Dempsey has used his fame and reach to organize an annual charity ride called the Dempsey Challenge to raise money for patients (and their families) fighting cancer.

Continuing our Texas theme, native Texan Matthew McConaughey not only follows the Tour but also rides and races himself. He's been photographed training with Lance Armstrong on several occasions and has multiple triathlon finishes under his belt, too.

The second politician on this list, former Secretary of State John Kerry has gotten some high compliments from legendary team director Johnathan Vaughters. Not only is Kerry a huge Tour de France fan (and can supposedly drop the hammer on the bike) and regularly attends the race, but he also helped save Vaughters' Cannondale-Drapac team when the title sponsor pulled out. We personally love this hilarious interview between American cyclist Taylor Phinney and Kerry just before the start of Stage 15 of the 2017 Tour de France.

READ THIS NEXT: 24 Celebrities You Didn't Know Rode Bikes