Be a Gear Guru on Your Bike 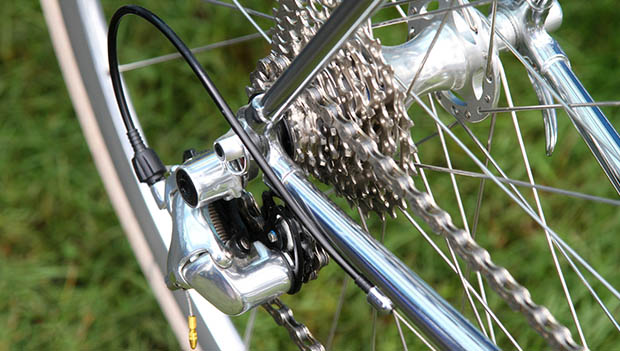 Let's examine the following scenario: Bruiser Bob and his twin brother, Nimble Ned, are riding up a challenging hill halfway through a race. Not wanting anyone to question his masculinity, Bob eschews his small ring and chooses to muscle up the hill, climbing at a grueling 55 to 60 rpm.

Ned, far more secure in his masculinity, doesn't think twice about dropping into his granny gear, opts for his lightest gearing combination and spins up the hill at a spry 80 to 85 rpm. Both brothers coast up the hill together, but that is not the end of the story.

Riding at a low cycling cadence in a relatively big (hard) gear requires greater force to the pedals, increased recruitment of fast twitch muscle fibers (which burn through glycogen and fatigue quickly) and causes increased muscular fatigue and extra strain on the knees. Bob's legs are spent by the time he gets to the top of the hill, but by using smaller gears at a higher cadence, Ned has spared his legs for the rest of the ride.

The moral? Cadence should dictate your gearing--not the other way around. Most triathletes and roadies are well served keeping their cadence in the high 80's to low 90's through most of a ride.

If you find that you're struggling to maintain 80 rpm, shift to a smaller gear. On the other hand, if you're spinning out the gear and easily exceeding 95 rpm, shift to a bigger gear--either by moving to the big chainring or by using a smaller cog.

You Say You Want Some Revolutions?

A rider can only shift as much as his bike allows. The traditional two chainring setup, with a 12-23 tooth cassette, is insufficient for all but the flattest terrain. Once the rider reaches a moderate climb, his cadence will drop below 80 rpm even with a hard effort in his lightest gear.

A wider range of gearing on a cassette (12-25 or 12-27) can remedy that by giving him an easier "bail out" gear, but results in big gaps between gears. A third chainring is another option, though he will pay a penalty in weight and in sluggish, finicky shifting. A less common but increasingly popular alternative is the compact crank. It uses two chainrings, but with fewer teeth per ring (50 and 34 or 36 as opposed to 53 and 39), resulting in lighter gear ratios for higher cadence climbing.

If you have trouble maintaining speed at high cadences, don't give up and assume you're doomed to a life of low rpm's and dead legs. In training, gradually increase your cadence comfort zone by doing high-cadence accelerations on a slight descent. Choose an unusually light gear and spin as fast as possible for 15 to 20 seconds without your hips bouncing in the saddle. Recover for a minute and repeat five to seven more times.

A popular method among roadies is to ride a fixed-gear bike on rolling terrain using a gear that's appropriate for the climbs and therefore too light for the downhill sections. This forces you to ride at a higher cadence, and promotes greater neuromuscular efficiency.

Remember: The prize goes to the first racer across the line, not the one with the most macho gear selection. Prudent, ego-free gearing can help get you through your ride quickly and efficiently.