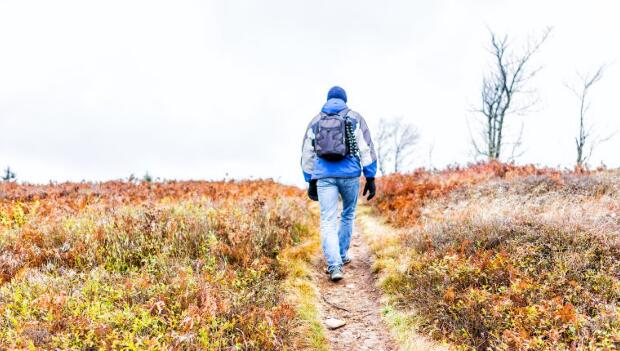 Walking more downhill or more uphill in an exercise routine can have a differing effect on whether a person is more likely to improve levels of fats in their blood or improve sugar levels in the blood, according to a small but intriguing study presented recently at the American Heart Association's Scientific Sessions.

All walking is beneficial for improving lipid problems and glucose metabolism.

But Austrian researchers, who put a group of 45 sedentary volunteers on both uphill and downhill mountain hiking routines, found a difference depending on which direction they were hiking.

The volunteers participated in a four-month hiking program in the mountains of Austria, two months of downhill walking for about an hour, three to five times a week, and two months of uphill walking.

A cable car was used to return them to the start of their hike.

If the research is verified by larger studies, it could mean that people might be able to better tailor their exercise to their health status.

"It's an interesting early study," said Sidney Smith, director of the Center for Cardiovascular Science and Medicine at the University of North Carolina at Chapel Hill.

Smith, who was not associated with the study, said ultimately the finding could be of special interest to people with diabetes.

But the study also raised a few issues, he said.

"It begs the question about walking on level ground," he said.

While the study did not look at that, numerous studies have showed that walking is beneficial to health.

For hill walking, the researchers noted, you don't have to live in a mountainous area to benefit.

People can walk up or down stairs, said lead author Heinz Drexel, a physician at the Academic Teaching Hospital Feldkirch, Austria. They also could adjust the incline on a treadmill, he said.

"Exercise is good for the heart because it's good for lipids and glucose metabolism," Drexel said. "We tried to distinguish between hiking up a mountain and down a mountain."

The hiking course covered about 2,000 feet of elevation in about an hour of walking.

The study found that downhill walking did a better job of improving glucose tolerance, which is a measure of how well a person is able to move glucose out of the blood and into the cells of the body.

People who are glucose-intolerant are at higher risk of developing type 2 diabetes.

Downhill walking improved their glucose tolerance by 8.2 percent, compared with a 4.5 percent improvement with uphill walking.

However, people who have lipid problems, especially high amounts of triglycerides, might want to consider uphill walking. Triglycerides are a type of unhealthy fat found in the blood.

While uphill walking, the test subjects lowered their triglycerides by 11 percent, compared with 6.8 percent while downhill walking.

Researchers are not sure what causes the differences. Intensity was not believed to be a factor because the hikers used heart monitors to stay within a prescribed heart rate zone.

Researchers think the difference may have something to do with the use of more concentric muscle activity while going uphill and more eccentric activity going downhill.