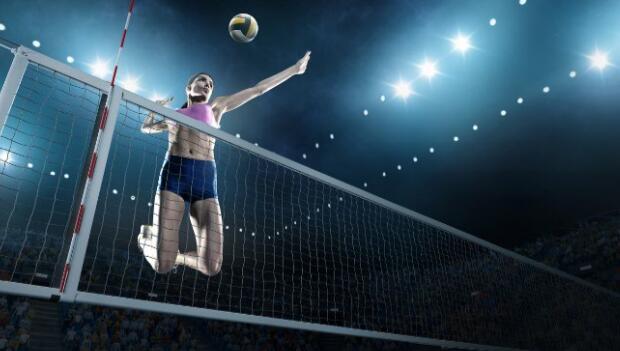 Volleyball is more than just serves and spikes, it's a physically-intense game that requires superior conditioning. Below are some great conditioning drills the beginning volleyball athlete can include in their training regimen to increase their playing ability and overall physical fitness.

Volleyball Conditioning Drill No.1: On the Line

One of the best workouts for a volleyball player is right there between the lines on the court. There are many variations to this drill, and players can be forced to race against each other or the clock to increase the workout.

Lateral movement is a vital part of volleyball. The skier drill is a great way to strengthen a player's ability to move side-to-side and reach those difficult hits in the corner.

How it's done: Hold hands together behind your back with feet shoulder- width apart. Jump side-to-side from right foot to left. When landing on the right foot, be sure to swing left foot out beyond the right-- making the drill even harder on your legs. Do this for 5-10 minutes and you'll definetly feel the effects.

Volleyball Conditioning Drill No.3: Going for the Block

The best offense is a good defense, and this blocking drill is the perfect way to add height to your block at the net.

How it's done: Draw a line, or some other mark, on a wall equal to the height of the net. Jump up and down quickly, with arms raised like you attemtping a block at the top of the net. Do this for a couple minutes (3-5) keeping a fast pace. Now slow it down, by doing full jumps from a squatting position with your backside parallel to your knees as you attempt the next jump.

This is a great drill to replicate game- type pressure and add to your team's existing drills. It requires at least ten balls and the rest of the team to shag.

How it's done: The coach rolls a ball out on the ground and a single player has to touch it. The second they touch it, the coach should have another ball rolling out in an opposite direction for the player to touch. Repeat this process for about a minute or so -- with approximately 10-15 balls being used. Obviously players not in the drill should shag the balls and bring them back to the coach to roll out again.

Use these four drills on a regular basis and you'll find you not only can play longer, but you can play better as well.