What to Know About Triathlon at the Tokyo Olympics 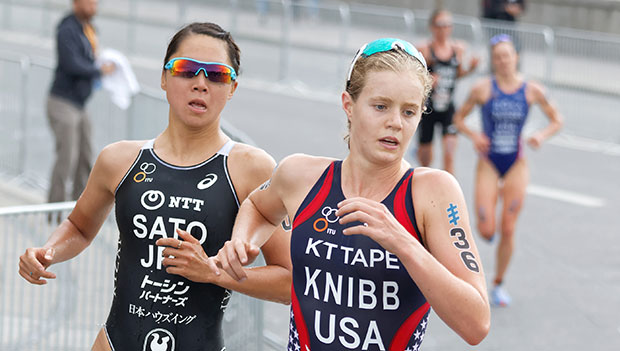 The opening ceremony kicks off this summer's action on July 23, and it's shaping up to be one of the most unique and exciting Games in recent memory. There are a handful of new sports that will attract new viewers, including surfing, skateboarding and sport climbing, as well as some must-watch storylines to follow from American athletes at the top of their respective fields.

But while we're fan of the action in general, we'd be remiss if we didn't highlight some of our favorite endurance sports.

Triathlon is still a relative newcomer in the Olympic Games, joining the lineup in 2000, but its inherent hard-racing, action-packed, multi-disciplinary format is one that's quickly become a fan favorite.

We broke down the basics, including new race formats, American athletes who've qualified (as of publishing), and how to tune in and catch all the swim-bike-run action from the U.S.

If you're a fan of triathlon, the course the officials have chosen for the Olympics might look familiar. The swim takes place in Odiaba Bay—a man-made bay made up of an artificial island  famously recognized by the Rainbow Bridge that connects Odiaba to Toyko. This is a protected swim, so water conditions should be ideal for fast splits.

The draft-legal bike course takes place in the Odiaba Marine Park, and with little elevation change it will be a flat-out effort to T2. The run also loops around the same area and will be a great place for spectators to catch late-race action.

Note this might be one of the hottest Olympic games ever, with predicted temperatures reaching 90 degrees with 55 percent humidity, which will undoubtedly play a role in the outcome.

The individual races include a 1,500-meter swim that includes two laps around the bay, a 40-kilometer bike leg made up of eight laps and a 10-kilometer run that's four laps.

The mixed relay is a bit different. Each team is composed of two men and two women, and each team member has to finish a 300-meter swim, 8-kilometer bike ride and a 2-kilometer run before tagging their next teammate (if we only had time to watch one event, this would be it).

At the time of publishing, there have been three Americans who have qualified to compete in Toyko.

In the women's field, Colorado's Summer Rappaport will be representing the United States after finishing fifth at the Tokyo ITU World Olympic Qualification Event. Taylor Knibb, from Washington D.C., will also be racing in Tokyo after her first World Triathlon Championship Series win ever (look for her to push the pace on the bike leg).

For the men's field, New Jersey's Morgan Pierson solidified his spot on the U.S. roster after earning a bronze medal in Yokohama after a blistering sub-30-minute 10K run split.

The medal ceremony will immediately follow each of the three events. As we've learned this past year, things can change—check the official Olympics website for the most up-to-date schedule.

As far as TV coverage goes, the Tokyo Olympics will be broadcasted exclusively by NBC in the U.S. All of the events will be covered and will be streamable on NBC's new Peacock streaming platform, but at the time of publishing, their national broadcast schedule has yet to be released. Click here to learn more and see theupdated schedule.

READ THIS NEXT: 9 Reasons Olympic Triathlons Are the Best Distance