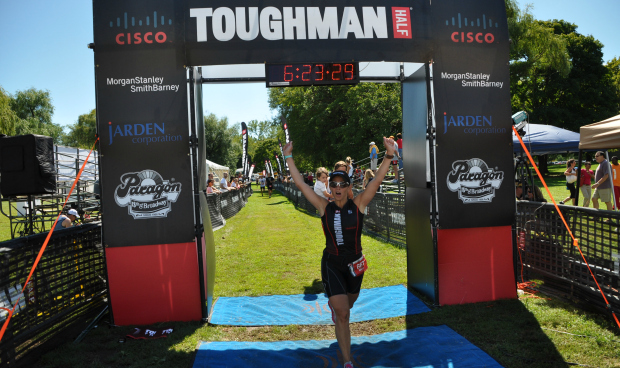 It started as a need for a local event, but TOUGHMAN has quietly exploded onto the triathlon scene, growing rapidly over the last few years.

Focusing solely on 70.3 and kids' races, founder Richard Izzo has carved out a previously untapped niche in the triathlon market. ACTIVE.com talked with the TOUGHMAN founder and discussed expansion, consolidation in the sport, and competing with IRONMAN.

Spoiler alert: there may be a TOUGHMAN event headed your way.

ACTIVE: First off, how did you get started in the triathlon business?

RI: I've been a triathlete myself for 30 years. I started off by volunteering for a local triathlon and over the next three to four years I started taking on more responsibility and became the chairman of it in the 1990s. I handed it off to someone else in 2002 and in 2005 I decided to put on a 70.3 race in New York because there were none around. You had to travel to do one. After the second year, it blew up.

ACTIVE: So TOUGHMAN has its roots in New York, where did it progress from there?

RI: I reached out to the tri-state area and brought these kids' races under one banner called TOUGHKIDS. We grew that from one race to seven or eight races, and we started the same idea in 2013 with the adult race. This year we have 13 races and there will be a lot more coming up in 2017. Right now in the US we are the second largest half series, second only to IRONMAN.

ACTIVE: Which race is the most popular on your series?

RI: The New York race is our most popular race, because it's the championship. We're following the model of having a 70.3 championship. Our races have a grassroots feel, and it's important to have a championship race in the US that people don't have to leave the country for.

ACTIVE: You say championship race--is there a pro field at these races or is it designed for age-groupers?

RI: This is how I see it: Pros are very welcome to race, but basically we're an age group series. Age-groupers can race for cash, they just have to qualify.

ACTIVE: Is that where you're seeing your registrations coming from? Are you heavily skewed to age-groupers or is there a mix?

RI: I call them elite age-groupers, because they could be pros. The guy that won last year is a top-notch guy in Argentina. And he came and did a 4:02 on our course, which is not an easy thing to do. This next year we have a couple pros who will race in order to get ready for the Kona, and our race fits perfectly in their schedule. We don't attract top pros because we aren't that kind of a race.

ACTIVE: What's the timeframe looking like for your expansion? What races will be available soon?

RI: We added Georgia, Indianapolis and Chili this year. Going international opens the door to a lot of possibilities. Next year, we've already announced Lake Havasu, Arizona and Puerto Rico.

ACTIVE: IRONMAN obviously dominates the market, so how do you guys compete with that?

RI: There's a first-tier market--which is IRONMAN--that nobody can compete with. Then there's the second-tier market--which is us, the independents and all the other brands. We take the independents and wrap them under one name--TOUGHMAN. In doing that, we maintain the grassroots feel of each race while standardizing every course we deal with. Websites, marketing and logistics are all taken care of. We bring series sponsors to the races, and most are companies who don't want to pay the IRONMAN prices. They can come in at a lower price point.

ACTIVE: Tell me a little about the kids' races, how have these been received?

RI: We're the only race series out there that has a kids' series, so basically the entire family can race on the same weekend. It's a good thing because it lets more families race, and more people register. It's also good because those kids compete in a TOUGHMAN event eventually, so it's good for the brand.

We have to support triathlon as race directors. These kids' races usually don't make much money, but the reality is without kids' races, there will be less interest as they become adults. Our giveback is to do these kids' races because it grows the sport and keeps it alive. But we're the only brand out there pushing kids triathlon on a national level.

ACTIVE: What's the process of acquiring these smaller, grassroots races?

RI: I'm not looking to be liable for 40 to 50 races all across the board, so we license our name because we own the TOUGHMAN brand. And if you take a look, that's basically how IRONMAN became a very strong brand. We look for the strongest race directors out there, and then we partner with them. The whole sport is going under a tremendous consolidation, and if anything, we're the brand that's consolidating the second-tier market.