HOKA ONE ONE: The New Kid on the Block 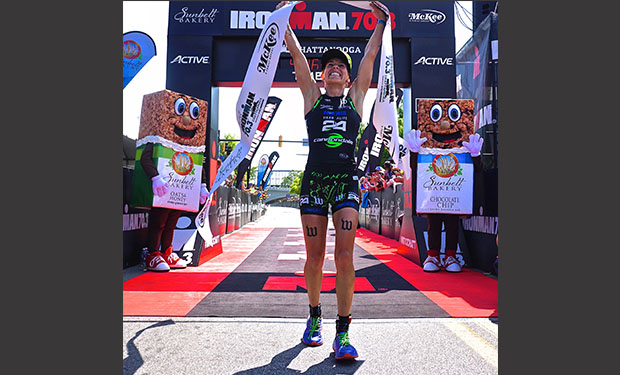 Triathletes have no shame when it comes to performance boosting gear. Thigh-high inflatable boots to increase post-workout recovery? Check. Helmets that look like a cross between an alien and a tadpole? Sign us up.

And when it comes to footwear, triathletes have wholeheartedly embraced a new style of bulky-looking, platform-like running shoes.

This maximalist trend--taken to mainstream popularity by HOKA ONE ONE--is arguably one of the biggest shifts in the running industry in recent years. Thick, cushioned soles and wide toe boxes have come to replace more minimalist alternatives, with much adulation from the triathlon community.

To a non-triathlete, these shoes raise questions as to the wearer's fashion sense (or lack thereof) and a general feeling of "Why?" But for both professional triathletes and age groupers, those who have tried a pair of HOKAs usually never look back.

"Their looks are deceiving, which is why some people are hesitant to give them a try, but I really believe it's one of those performance products [that] takes off because it really is a noticeable difference," says Heather Jackson, multiple IRONMAN Champion and professional triathlete. "Once people get past the looks, they're hooked."

Jackson is one of 10 pro triathletes sponsored by HOKA ONE ONE--the official footwear sponsor of the 2016 IRONMAN series. While still appropriate for shorter distance events, the benefits of maximalist shoes really come into play when training and racing at the 140.6 and 70.3 distance.

"Especially for IRONMAN athletes, the shoes are so supportive and cushioned for day-in and day-out training, and it's especially beneficial for the long runs," Jackson says. "With traditional shoes, I'll finish with sore calves and I'll definitely feel it. But with HOKAs, I'll be tired but have no calf soreness."

Made for Everyone, Ideal for Triathletes

Triathletes especially have to deal with a high level of training wear and tear. Running a marathon after a 2.4 -mile swim and 112-mile bike ride requires a different training approach and race strategy. With a breakdown in form late in the race, the right pair of shoes can make a huge difference on race day.

"When you get tired, you naturally start to pronate and you need assistance. This is the benefit of maximalist running," says Jean-Luc Diard, co-founder of HOKA ONE ONE. "This is why HOKAs have become popular in tri--triathletes are usually very tired by the run, so they need extra assistance and support."

HOKA's cushioning-to-weight ratio allows for a quicker footstrike, without sacrificing cushioning. Some may look bulkier than others, but the entire HOKA ONE ONE line is extremely performance driven.

"The first thing I noticed was how cushioned they were, and I even started doing some tempo runs in the Cliftons, their thickest offering," Jackson says. "If I'm doing shorter speedwork, like 800s, I'll use the new Claytons which are perfect for getting the comfort but with half the sole. I race in the Claytons as well."

While HOKA has yet to state any injury prevention benefits, some athletes with chronic knee problems or shin splints swear by the added cushion built into the sole—a huge draw for long course triathletes. Other athletes have also noticed a decrease in soreness and tendon issues.

"I didn't have a shoe deal before this for five years, purely because my feet are super sensitive," Jackson says. "I didn't want to sign and turn up injured a month later because I wasn't a good fit for their shoes. We went to HOKA because it was all I was running in."

One run is all it takes to convert a skeptical triathlete into a lifelong fan. Plus, with more and more people joining the maximalist trend, it looks as though the style will be around for years to come.

"It took me one run to know these were the shoes for me," Jackson says. "It feels a little different at first, but literally after that first run, they felt normal."