How to Eat Right Before a Soccer Game 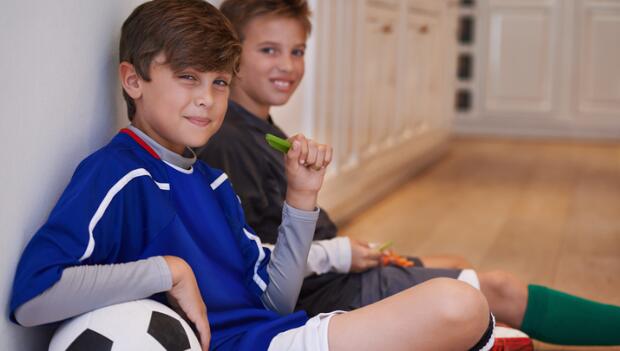 OK, I'll admit it. I've put this article off for almost two years. It's a complex issue and I wanted to make it easy to understand, but not over simplified. What triggered my urge to get it done? A good intentioned, but poorly informed, flyer put out by a grocery chain about eating right. (Targeted towards youth soccer families.)

In this flyer they were discussing the recent negative press high carb / refined / processed foods were getting. They were stressing that eating only low carb food and complex carb foods was a "good replacement" for healthy eating. After my head exploded and I put the pieces back together, I sat down to write this.

First, if your child is obese, overweight, diabetic, or has other eating / health issues, this is not for you. I am talking about the healthy competitive soccer player that trains hard several times a week. Their body is a processing machine and needs the right fuel at the right time. (Just doing the touch stations we show in the SoccerU series can burn 350 calories in 30 minutes.) I have trained soccer players at all levels of play and ages; from young 7 year olds to professional players training six days a week, twice a day. Getting this right is more important than most people know.

Next, I will not be giving you a "lifetime eating chart". I am focusing on the 24-48 hours prior to competing. REMEMBER... Long-term body development, health and growth are different from pre-game preparations.

Get this straight. This is not a nutrition article from the USDA. It's a real world guide for youth soccer players. While much of the same information is used for adult players, we have to understand the "mind of the child" in this formula.

One of the key issues with youth players is that they often can't overcome eating habits/tastes/phobias, for the sake of health and nutrition.

The greatest food not eaten? What if I told you about a top secret soccer drink? OK, put raw oysters, broccoli, and mushrooms into a blender, then add chicken broth and puree. Now set it in front of you child and see what happens...nothing. It might be the secret to becoming a star player but guess what? It's not going down. We have to face the reality. Younger athletes will generally eat a limited range of foods. Something simple as color, texture or smell can make them say, "No way."

Also, youth players will generally fill up faster. Making sure that they get the proper carb intake is very important since their volume of eating is generally lower. Whenever possible, eliminate all snacks just before meal time. They should come to the table hungry (after main meals, snacking is encouraged.) Also, avoid large consumptions of fluids before eating. They should drink while they eat and afterwards. Large amounts of fluids will take away hunger and fill the stomach with low-value volume.

Next, let's figure out what to eat and when.

Learn the groups (these are simplified):

What do we use as fuel?

The body burns mostly carbohydrates as fuel. (Yes, fats and proteins are used but the body uses what is easiest first.) Excess fuel is first stored in many places including the red blood cells, muscles, and liver as Glycogen. Then once those reserves are full, it stores excess as body fat. Long distance runners and athletes that perform sports for long periods of time, actually start to burn fat for fuel. However, since most youth matches are limited to around an hour, we don't see this much. Therefore, building reserves and refueling is critical.

The "stored fuel tank" will last different lengths in different players. Studies vary on this but most seem to indicate that somewhere around the 60-120 minute mark of continuous hard-paced exercise is when stored fuel, glycogen reserves, can start to be depleted. This is often referred to as hitting the wall.

How are the fuels processed, stored and delivered?

This is almost too complex of an issue to deal with thoroughly, however we are dealing with pre-game eating so this makes it easier. Just keep this thought in mind: The body will store excess fuel for later use. So, as game time approaches we want to load or even overload. We want our diet to be switched from balanced to heavy with fuel (we cut down on fats and proteins, but not eliminate them, and focus on carbs). The percentages vary from expert to expert but the number goes as high as 75 percent in some studies for pre-loading.

We simply can't shove large amounts of sugars or simple carbs into our body at the last minute, or close to game time. This may increase the release of insulin and actually hinder what we are trying to accomplish (as well as trigger low blood sugar levels). Therefore the best practice is a mixture of simple and complex carbs over a longer period of time. As game time approaches we run out of time for heavy digestion, so easier fuels are needed.

You will constantly hear that you should focus on "complex carbs" for long-term loading, but let's be real. They're kids. You can't force them to eat what they won't, and they can only eat so much. We cannot apply the same rules to adult athletes to kids. If your child is an eating machine then you probably can go with this premise. However, I have seen too many youth players eat very little and fill up fast, not getting enough carbs. This is why I prefer to see youth players switched over to level 2 carbs for the last 12 - 24 hours.