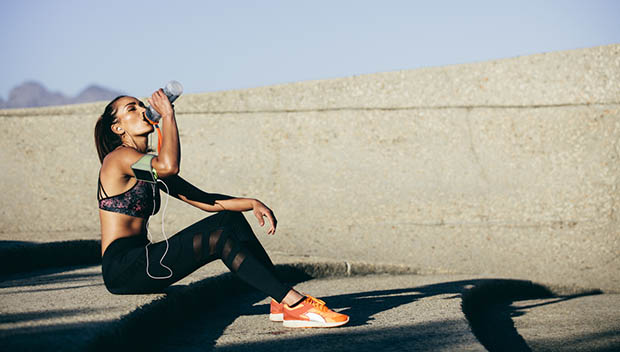 Whether you're new to running or a seasoned pro, there's a good chance your nutrition strategy isn't airtight. Many runners might not even know they're making mistakes, but even little changes in nutrition can have a big effect on performance. We asked some high-level coaches and nutritionists to share the slip-ups they see most often...and how to fix them.

Mary Johnson, a USATF/VDOT certified coach and owner of Lift.Run.Perform, emphasizes the importance of on-the-run nutrition with all of her athletes. Johnson says, "If they're running 80-plus minutes, they MUST intake a gel, starting at 30 to 40 minutes, preferably with water." Although a 100-calorie gel might not seem like a game-changer, Johnson says she's seen amazing performance increases, especially with her sub-elite athletes. There are a number of products on the market that appeal to many different tastes and stomachs—experiment during training until you find what works for you.

Kelsey Beckmann, R.D., owner of Meteor Nutrition and a 2020 Marathon Olympic Trials qualifier, says the top mistake she sees athletes making is skimping on nutrition before and after training. "They'll end up reactively eating what their under-recovered, intense cravings tell them to eat later in the day," Beckmann says. "This can be problematic because it jeopardizes recovery, adaptation to training and then promotes cravings [for] foods that may not align with their health and performance goals." The solution? Try meal planning. Knowing what you'll eat before, during and after your workouts removes the guesswork and helps prioritize nutrition instead of whatever you're craving in the moment.

Consuming Too Much Fat or Fiber Before a Run

Some runners are able to down a bean burrito before a workout while others have to stick to bland carbs in the days leading up to a hard effort. Until you know how much your GI system can handle, it's best to stick to low-fiber and low-fat foods before breaking a sweat.

Kelly Hogan, M.S., R.D., a New York City-based runner and registered dietitian, says "One of the biggest mistakes I see runners making is not fueling enough to support their training. It's common to underestimate how much we need to eat and/or second guess hunger when it hits, which can result in under-fueling and ultimately impact performance and the health of the runner." If you're not sure how many calories or macronutrients you need to fuel your training, a registered dietician can help you dial in on your needs. In general, if your weight is steady and you're seeing fitness gains, your fueling and training are probably at a good equilibrium.

Johnson says what runners do after their workout is almost as important as the workout itself. "Post-run, I like to see a snack that includes a healthy mix of carbs/protein. Supplementing with a protein powder isn't necessary, but it's an easy way of sneaking in additional protein into the day."

Hogan agrees, "The other mistake I see runners make is not fueling appropriately after a run or workout. It's super important to consume a combination of carbohydrates and protein within about 30 to 45 minutes after a run to help the body recover, repair damaged muscle cells and replenish glycogen stores. The longer the run and the harder the workout, the more important it is to prioritize refueling."

If your post-run routine is rushed, plan ahead and stash a pre-blended smoothie in the fridge or reach for something easy like a glass of chocolate milk or a cup of Greek yogurt.

We get it—life is busy. Some weeks you're on top of your meal prepping routine, making beans from scratch and pre-washing a rainbow of vegetables. But then work gets crazy or the kids get sick and the next thing you know you've eaten stale popcorn for dinner two nights in a row. Just like training consistently is the key to getting faster, fueling well day-in and day-out will build a strong nutritional foundation.

There's no such thing as perfection, but making time for regular meals, staying hydrated and finding foods that work with your individual GI system will help you to run your best.

READ THIS NEXT: The Dos and Don'ts of Virtual Racing