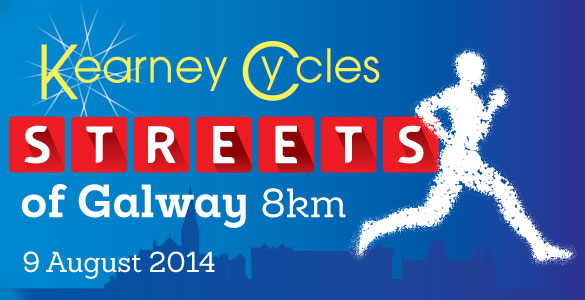 2014 sees the 29th year of the famous Streets of Galway. Beginning in 1986 at the tail end of the first running boom, this year, in the midst of an even bigger running boom, Galway City Harriers AC as race organisers hope to attract 2500 participants onto the streets of our city and suburbs.

This year we are delighted to again have Kearney Cycles, http://www.kearneycycles.com/, as the title sponsor.  Local businessman and talented runner Martin Kearney with his family have operated the cycle shop in Galway since 1990. Located in the Terryland Retail Park, Headford Road they are one of Ireland's leading bike shops, with over 5500 square feet, 200 different models on display, and a further 500 in store.

The race starts at the Claddagh, home to the world famous Claddagh ring and takes in many of the sights of Galway city. In the first km the route passes the Spanish Arch, Quay St. and the Druid Theatre. Eyre Square makes for a distinctive 1km marker and not to be outdone the 2km marker is at Galway Cathedral.

The course then takes you out towards Salthill, past Pearse Stadium and then back in on the 'Prom' along Galway Bay for the last 2.5 km. If the prevailing westerly wind prevails you'll have the wind at your back for a speedy gallop home before a sprint to the finish line at Nimmo's pier.

Join us afterwards for the traditional cup of tea and race analysis. Then I'm afraid there's just too many options to mention. Galway is legendary around the world for its entertainment scene, so why not combine this with the 'Streets' for a great night or weekend in the City of the Tribes.