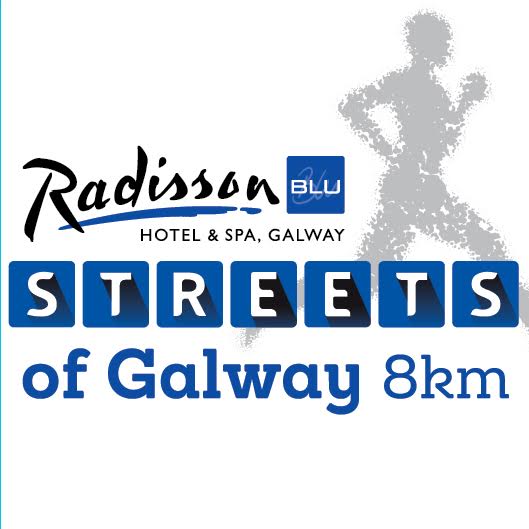 In 1518 the Galway City Council decreed “Neither O' nor Mac shall strut ne swagger through the streets of Galway”.  Now nearly 500 years later the Galway City Harriers give you the opportunity to strut, swagger, run, jog or walk in the Streets of Galway race, sponsored by Radisson Blu Hotel& Spa Galway, over a distance of 8km.

2016 sees the 31st edition of the famous Streets of Galway 8km road race. Since its inception in 1986 the event has grown into one of the most prestigious road races in the country , yet remains true to its original motto of Sport for All, as many locals and visitors take on the event year in year out. Galway City Harriers AC as race organisers hope to attract 3,000 participants onto the streets of our city and suburbs.

The race route takes in many of the sights of Galway city. In the first km the route passes the Spanish Arch, Quay St. and the Druid Theatre. Eyre Square makes for a distinctive 1km marker and the 2km marker is at the landmark Galway Cathedral.

The course then takes you out towards Salthill, past Pearse Stadium and then back in on the 'Prom' along Galway Bay for the last 2.5 km. With the wind ( usually) at your back this is a very fast section,  before a final sprint into the South Park finish line.

Join us afterwards for the traditional cup of tea and race analysis, and this year we will have a big post race bash as well!  Galway is legendary around the world for its entertainment scene, so why not combine this with the 'Streets' for a great night or weekend in the City of the Tribes.

The Radisson Blu Hotel & Spa, Galway  offers excellent  facilities such as the renowned spirit one spa   and , spirit one fitness and leisure, which boasts a pool, fully equipped gymnasium , with  excellent membership rates are available via Ronan on 091 538525.
We would like to thank the Radisson Blu Hotel & Spa, Galway  for coming on board in what will be a very exciting partnership.