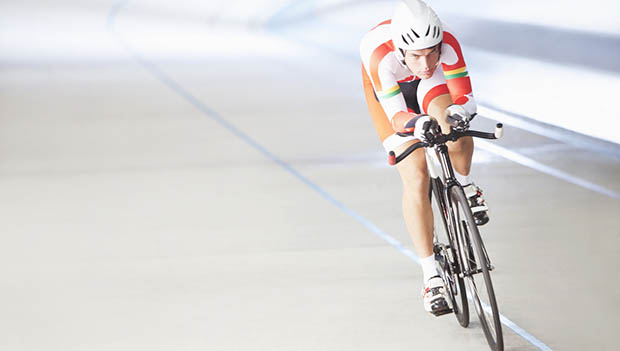 When you think of a bicycle, it’s more than likely images of sleek, high-performance road bicycles or rugged, full-suspension mountain bikes come to mind. This makes sense—they’re two of the most common forms of bicycles around (besides the more leisure-focused hybrid- or beach cruiser-style bikes), and anyone from kids to old-timers can enjoy this impact-free way to stay in shape and explore new areas.

But what if we told you there’s another type of cycling? We’re not talking about gravel or cyclocross that’s increasing in popularity in recent years—we’re talking about track cycling.

Unless you’ve been around cycling for a while, you may not know what “track” cycling is. It certainly has a storied history with celebrated champions and seriously impressive records, but for some reason it’s not as widespread in the U.S. as it is overseas.

In this piece we’re starting from scratch, covering the basics of what track cycling is (and its events), the gear you need and some high-level basics for beginners.

What Is Track Cycling?

In its simplest form, track cycling is a sport where cyclists ride counter-clockwise on a steeply banked (often 45 degrees at the ends) oval track called a velodrome. Some of the oldest velodromes date back to the 1870s, can be made with either wood or cement and can be either indoor or outdoor. Most velodromes are 250 meters in circumference (required for Olympics and World Championships), but sizes can vary from 150 meters to 500 meters, as can the degree of the bank.

While there are several different formats and events for track cyclists, let’s focus on the Olympic programme since the Olympic Games are right around the corner.

The “keirin” event requires a group of riders to be paced behind a motorbike (called a derny), as it ramps up the speed to 50 kph through 1,400 meters. Once the motorbike peels away, the riders sprint through the final two laps to the finish.

Speaking of sprinting, the “sprint” event is a three-lap (750 meter) race where the first rider to cross the line out of the group of 28 riders wins. While simple in theory, positioning is paramount—riders will often come to a complete standstill to force their competitor to take the lead in order to gain a slipstream advantage.

Next, the “team pursuit” begins with two teams of four riders on opposite sides of the track, where each team tries to finish the 4,000-meter distance the fastest. Teams follow the paceline format—each rider takes a turn at the front before moving to the rear.

Similar to a team time trial, the “team sprint” event features teams of three (teams of two for women) racing over three laps, with each cyclist required to lead for one lap before peeling off for the next rider to take over.

Versatility and consistency are the hallmarks of a strong omnium rider, although most omnium competitors aren’t considered the best in any one discipline.

Now for the fun stuff: gear. While similar to that of road cyclists, track cycling requires some pretty specific gear designed for the unique characteristics of the velodrome.

The bikes are simple, and rules are in place to make the field of competition much more focused on the strengths of the riders rather than how advanced their bikes are. The bikes are pretty bare bones—they can be made of any material, but carbon fiber has become the norm for its strength and stiffness; they don’t have shifters or different gears, and they don’t have brakes. The chainring and cog can be swapped out before the race, depending on the rider’s preference and the style of race. Track bikes are usually much more aggressive in their geometry to minimize the rider’s drag and increase aerodynamic efficiency.

Besides bikes, form-fitting skin suits (one-piece lycra suits) further reduce drag, and because of the raw power of these athletes (it takes a huge amount of strength to power these single-speed bikes), most athletes will both clip in and strap their feet to the pedals to prevent it from coming undone during a max effort.

Unlike other disciplines in cycling where you only need a bike to get started, track cycling obviously requires a velodrome. To start, check your local area for a velodrome near you, and contact it to see when it’s open for public laps. Most velodromes are beginner-friendly and encourage new riders to come out and experience riding on the hardwood themselves, with rental packages and group instruction for newbies.

Before you show up, though, here are a few simple-yet-important things to remember as you build your track cycling foundation.

First, don’t forget you can’t stop pedaling. The bikes have fixed gears, which means however fast you’re moving is how fast your crank will be moving too. Conversely, don’t forget you don’t have brakes—if you want to slow down, it’s up to you to slowly ease off the power until you come to a stop.

Also, the 45-degree bank on each end of the oval can be pretty intimidating and takes some practice to get used to. Stick to the lower part of the bank until you’re comfortable enough to build up sufficient speed before moving up. The physics of this might feel weird at first, but the banked corners require riders to actually increase speed through the turns (unlike road cycling or mountain biking).

Next, understand crashes are a common part of track cycling. Between the close quarters, high speeds and lack of brakes, things can get wild (which is also part of the draw). If there’s a crash in front of you, try to take a line that goes above the crash, not below, as riders slide down the banked surface toward the black inside line. Passing on the outside is also a great technique to safely overtake a rider in front of you and avoid creating a crash yourself.

Lastly, and we’ve mentioned this before, all velodromes require cyclists to ride counter-clockwise—left turns only!